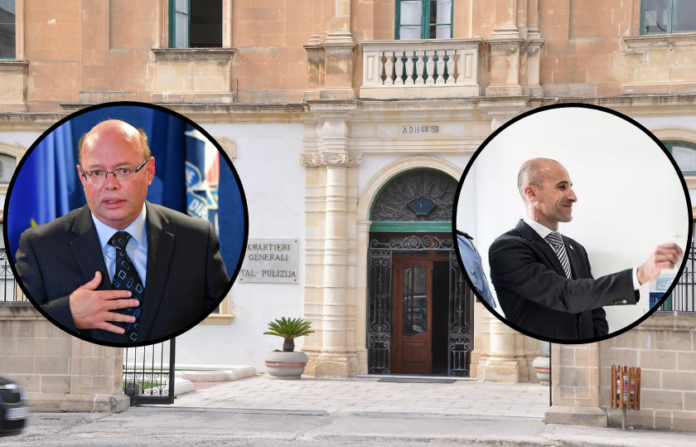 The Police are not commenting on whether there will soon be a new Police Commissioner.

Sources told Newsbook.com.mt that there is a possibility that the current Chief Executive of the Police Force Angelo Gafa will replace current Police Commissioner Lawrence Cutajar.

Gafa told Newsbook.com.mt to send any questions to the Police Media Relations Section. Five days on the Police have not replied. Newsbook.com.mt asked if Gafa is due to be appointed as the new Police Commission and what prompted this change.

Media speculation has suggested that there is pressure to name a new Police Commissioner, indicating Angelo Gafa as the successor-in-waiting. observers have remarked that Cutajar has proved to be a lackluster Commissioner who cannot seem to shake off the image he painted of himself eating rabbit while journalists were doorstepping fleeing Pilatus Bank chairman Ali Sadr Hasheminejad

In July 2018 Adrian Delia once again asked for Lawrence Cutajar to resign from his post following the discovery that a large amount of useful case evidence was disappearing from district police stations and the law courts.

In May 2018, Partit Demokratiku showed their concern on the lack of action from Lawrence Cutajar in relation to The Daphne Project’s revelations.

In April of 2018, Partit Nazzjonalista parliamentary representative Jason Azzopardi said that a Police sergeant gave the heads up to the three persons that were going to be accused of the Caruana Galizia murder. Azzopardi had asked for Lawrence Cutajar to resign and also said that the Government was in cohort with criminals.

Amy Borg   April 8, 2020
Minister for Tourism and Consumer Protection Julia Farrugia Portelli and ITS to announce survey results on the students’ online learning experience and measures being taken in relation to the situation of COVID-19.

Monique Agius   April 7, 2020
The Chamber in a statement said that the costed proposal which was presented to the government is to extend its support to businesses based on their loss of turn-over rather than a NACE code approach. The study provided by the Chamber takes a scenario-setting approach and calculates that the measure would cost the government an additional €48.3 million per month on top of the measures which were already in place.

Jesmond Saliba   April 6, 2020
Greece confirmed 62 new cases of COVID-19 later in the day, bringing the total in the country to 1,735 since its first case wes reported in February. Seventy three people have died.