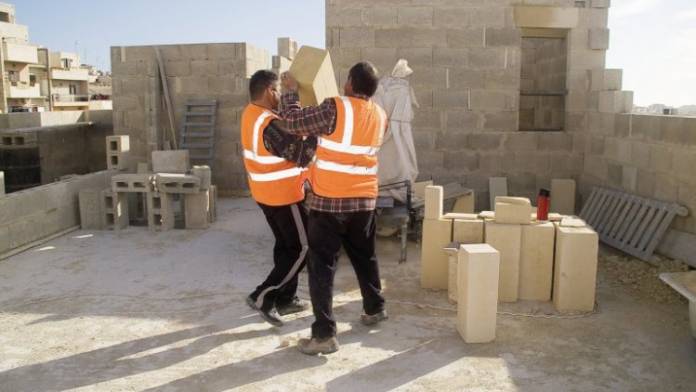 Between 2002 and 2018 the number of foreign nationals working in Malta has increased from 1.7% in 2002 to 22.5% in 2018. Data collated and analysed by the Central Bank Quarterly Review (CBQR) gave the total figures as 2,013 foreign nationals working in Malta in 2000 to more than 55,000 in 2018. The CBQR said that roughly two-thirds of these foreign workers are EU nationals and, until 2018, the main migrant inflow in the workforce was from the EU. “However, in 2018 the net migration of Third Country Nationals (TCNs) was almost double that of EU nationals” observed the CBQR. 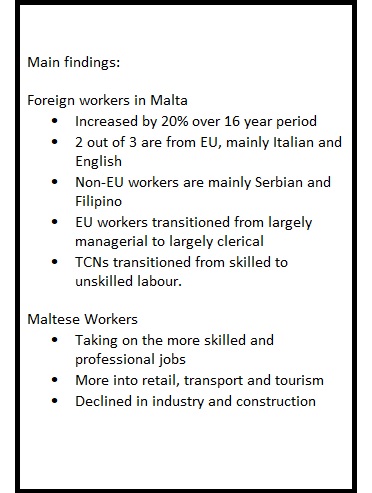 The number of TCNs in Malta rose from almost 14,000 in 2017 to around 21,000 in 2018, whereas the number of EU nationals increased from around 30,000 to more than 34,000 persons. The CBQR said that the increase in employment in the EU and downward trajectory in unemployment in recent years in Europe is likely to have slowed down the flow of migrants from EU countries to Malta, thus requiring more labour from third countries.

Who are these foreign workers?

The CBQR broke the foreign workforce into its components. Over 9,000 Italians were employed in Malta in 2018, equivalent to 27.3% of EU workers with the CBQR observing that the number of Italian nationals participating in the Maltese labour market increased rap­idly since the global financial crisis, as these stood at just above 500 employees in 2008. 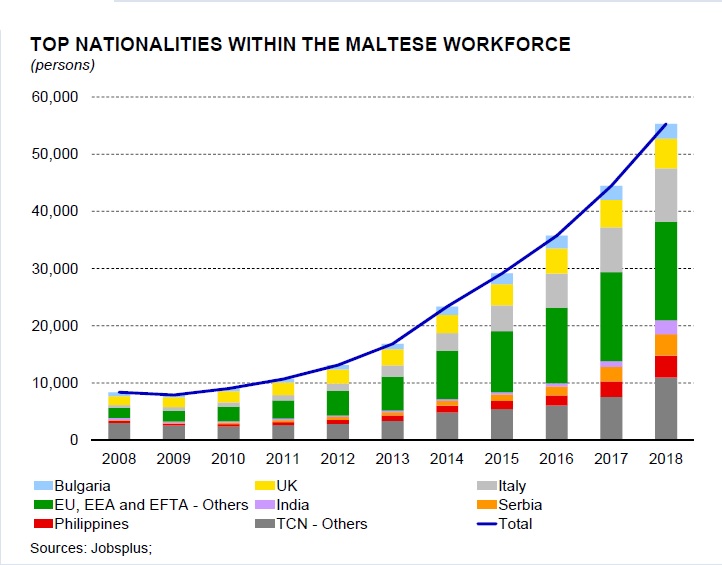 At over 5,000 employees, the United Kingdom (UK) is the second largest country of origin. Bulgaria ranked third among EU countries of origin.

The Philippines and Serbia were the most important third countries of origin, with each providing more than 3,500 employees. Reliance on Indian nation­als has also increased significantly. There were around 2,400 Indian nationals employed in Malta at the end of 2018. Overall, nationals from the Philippines, Serbia and India accounted for around 47.7% of all TCNs working in Malta last year.

What do they do?

Matters have changed since 2002. The CBQR said that while in 2002, EU workers could comfortably aspire to a managerial position, in 2018 their aspirations were downgraded to clerical. The share of EU nationals working in services and sales also increased somewhat since 2002. For TCNs, in 2002, these were most likely to be employed in craft and other related trades positions, they are now most likely to be employed in an elementary position.

And the Maltese workers?

Turning to employment by sector and nationality, we note that Maltese nationals are more likely to be engaged within the sector comprising retail transport and tourism and in public administration, health and education. By contrast, EU nationals are more likely to be employed in the retail, transport and tourism, in professional and administrative support activities and in the arts, entertainment and recreation sector.