Outgoing Attorney General Peter Grech’s handling of the assassination of the Daphne Caruana Galizia – and of the stories she pursued – are arguably the biggest sources of controversy during his 10-year term.

But his chosen replacement, State Advocate Victoria Buttigieg, has failed to impress the slain journalist’s family.

On Facebook, Matthew Caruana Galizia published an email exchange dating to December 2017 – two months after his mother’s assassination – concerning the Security of Supply Agreement signed with the Electrogas Consortium: whose then-director Yorgen Fenech stands accused of ordering the murder.

He explained that through the exchange, involving representatives of the consortium and of the Office of the Attorney General – including Buttigieg – Electrogas lawyers were urging Grech to deem then-minister Konrad Mizzi’s signature on the agreement to be sufficient, thus bypassing Parliament and paving the way for the consortium to obtain long-term financing at a time when it was struggling to cover commitments.

Buttigieg is another Grech – Jason Azzopardi

The two MPs who represent the family in legal proceedings – Jason Azzopardi and Therese Comodini Cachia – both shared Caruana Galizia’s remark on social media in an apparent endorsement. But Azzopardi went further, explicitly arguing that Buttigieg was not fit for purpose.

“Today Malta has the first Attorney General – who now serves as the prosecutor-general – who never handled a criminal case in their career,” he said.

“Peter Grech has been reappointed Attorney General. The consequences will not be pretty.”

A hard task ahead, Delia insists

But in a sign of differences of opinion within a Nationalist Party in the midst of a leadership race, embattled PN leader Adrian Delia issued a statement suggesting cautious optimism. Azzopardi remains the party’s justice spokesman, but in contrast to what is standard practice for the PN – in which all MPs whose official remit is relevant tend to sign statements – Delia was the only signatory to a statement submitted in the party’s name.

Delia said that he wished Buttigieg well, but emphasised that she faced a difficult task ahead: to “regain dignity and respect for an Office of the Attorney General which was tarnished by her predecessor.” Grech, he said, became a puppet in the hands of a Labour government who seized control of the country’s institutions.

Buttigieg is the first Attorney General not to be directly chosen by the Prime Minister: following a series of reforms approved by Parliament last July, she was recommended by an independent commission composed of three retired judges. 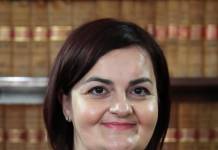 Her appointment was welcomed by Prime Minister Robert Abela, who informed President George Vella of Buttigieg’s selection this afternoon.

“This new method of appointment has led to the selection of the first woman Attorney General, who possesses the integrity and competence required by this important role,” Abela said.

Parliamentary Secretary for Equality Rosianne Cutajar, meanwhile, said that it was an honour to see the government recommend the appointment of the first woman Attorney General, on the advice of the commission.