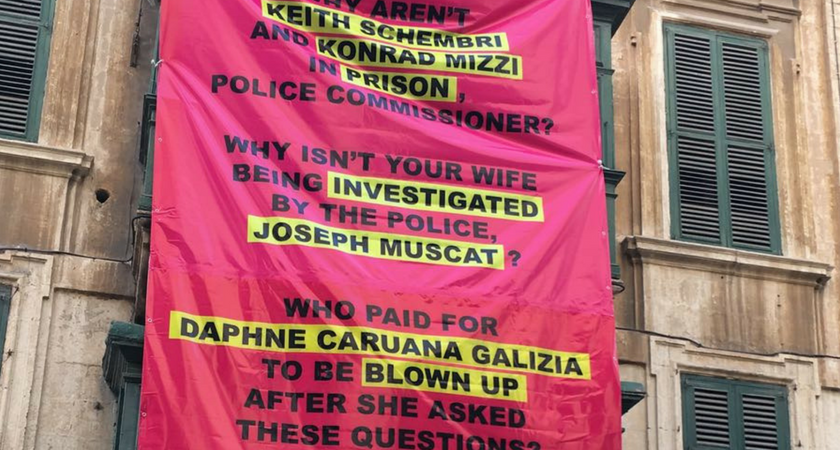 The family of the assassinated journalist, Daphne Caruana Galizia,  filed an application in the Constitutional Court protesting that their right to freedom of expression was breached by the Planning Authority, on Friday.

Sons Matthew, Andrew and Paul and their father Peter claimed that two banners on the outside of a private property in Valletta, had been removed by the Planning Authority. The removal of the banners was already protested in court before, however following a reply from the Authority, the family filed an application in the Constitutional Courts claiming that the PA had breached their right to freedom of expression citing Article 41 of the Maltese Constitution and Article 10 in the European Convention on Human Rights. Both articles provide and protect the right to freedom of expression.

In their letter, signed by the family’s lawyers, Therese Comodini Cachia, Jason Azzopardi and Eve Borg Constanzi, the behaviour is deemed abusive and that it infringes on the right to freedom of expression since the removal of the banner did not allow them to deliver their message. From the content of the banner it was clear that the banner was not a billboard or an advert, thus the regulations cited by the PA do not apply.

The Caruana Galizia family had filed a letter in the Constitutional Court protesting the removal of the banner which they had put up in Old Bakery Street, Valletta. The banner carried the following questions;

Why isn’t your wife being investigated by the police Joseph Muscat?

Who paid for Daphne Caruana Galizia to be blown up after she asked these questions?”

The first banner was put up on 31 March and was subsequently removed by the Planning Authority on 7 April. The family was not aware that banner had been removed by the Authority and had reported the banner stolen. A second banner was affixed to the same private property on 15 April and was removed within twelve hours presumably by the same Authority.

In their application, the family also said that they were not informed of any further progress with regards to any new information on who might have commissioned the assassination of the journalist.