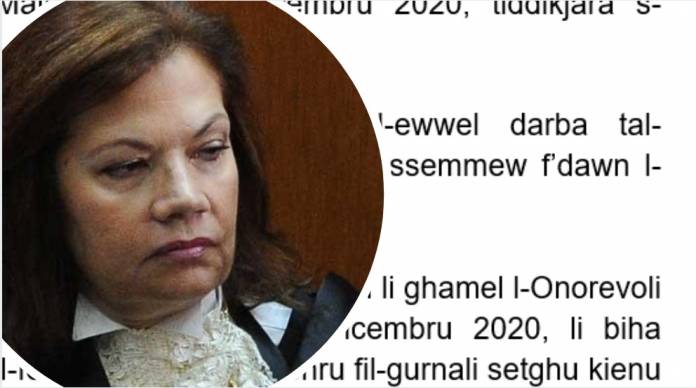 The family of assassinated journalist Daphne Caruana Galizia and the two other judges sitting on the board of Public Inquiry expressed their full trust in the integrity and impartiality of Judge Abigail Lofaro, the other member of the inquiry.

It was Judge Lofaro herself who asked the family, the other judges and the state to express their trust in her following a story published yesterday in The Sunday Times of Malta and Malta Today.

In a statement the afternoon, the Government announced that the public inquiry will proceed with the same board members and nobody will be allowed to undermine or hinder the work of the board.

The Sunday Times of Malta and Malta Today reported that Parliamentary Secretary Rosienne Cutajar was involved as a broker in a deal for the buying of property in Mdina by between Yorgen Fenech. The seller was Green Eyes Ltd which was represented by Dr Pierre Lofaro who is the husband of Madam Justice Abigail Lofaro.  It was reported that Cutajar received over €46,000 in cash which was not included in her declaration of assets made to Parliament.

In her declaration in open court, Judge Lofaro said that she refutes the insinuations and allegations that were made. She added that there are no grounds for recusal but notwithstanding this, she said that she would be ready to keep on sitting on the Inquiry Board only if the State and the family declared their full trust in her integrity, impartiality and independence.