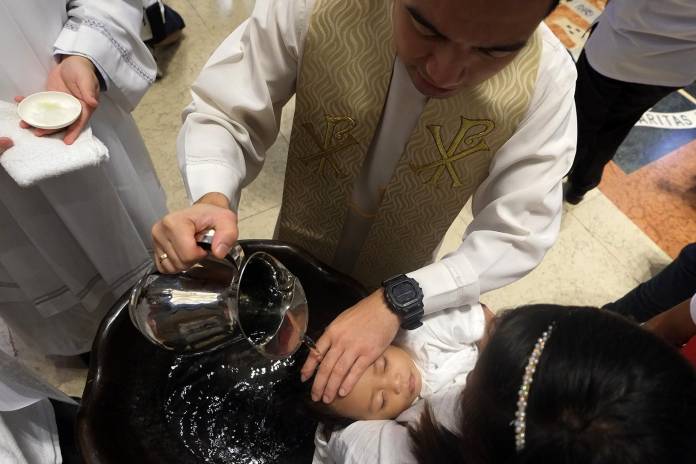 Cardinal Luis Antonio Tagle led the baptism of 450 children from Manila’s slum areas on Saturday, September 28, 2019, and stressed that the sacrament is a “grace” from God and thus no price tag is hanged to it.

The cardinal welcomed the kids into the Manila Cathedral to signal to the poor that the sacraments “are for everyone”.

“And because it is a grace, it is for all. Being simple and poor are never obstacles to receiving the grace of God.”

“The grace of God is for everyone especially the poor whom he cares for. The grace cannot be paid, it has no price,” he said.

Seven other priests joined the cardinal in the service using several baptismal fonts, and the prayers read out at the same time.

Those baptized, mostly under the care of the Tulay ng Kabataan (TNK) Foundation which assists street children, were as young as infants and as old as 17 years.

The foundation has long been serving poor children, who often have to scavenge for food, with programs aimed at restoring their dignity and bringing them closer to God.

In his homily, the cardinal also reflected on the parental duty of transmitting the faith in the home.

He said that parents and godparents must help develop and help their children grow in faith in which they were baptized.

“Let us raise our children as good followers of Jesus, a good member of the Church, and a responsible citizen of this country,” Tagle said.

“But for it to happen, we invite the parents to also grow in faith,” he added.

In 2017, the TNK also facilitated the baptism of 400 indigent children at the cathedral.

At least 1,300 children are welcomed daily in TNK’s 24 centers spread across Metro Manila.

In 2015, Pope Francis visited the children in one of its centers in Intramuros, Manila.

The foundation had helped more than 55,000 children over the past 21 years.

Watch: “Immigrants are modern day slaves; we must treat them with...