Transport Malta has remained silent on how many caravans are slapped with an enforcement notice in accordance with the subsidiary legislation relating to the clamping and removal of motor vehicles and encumbering objects regulation.

Newsbook.com.mt has reached out to the Planning Authority, Transport and the local councils of Mellieħa and St Paul’s Bay over the caravans occupying space in Qawra and Mistra Bay.

The Transport Authority was asked to provide the number of caravans which have been notified according to the subsidiary legislation, information relating to the fines incurred by the users and action which has been taken by the relevant authority.

Similarly, both Mellieħa and St Paul’s Bay local councils have failed to reply when asked about their position on the caravans.

A spokesperson for the Planning Authority told this newsroom that the Transport Malta or the Police or the Local Council is responsible for caravans parked on roads or parking areas.

Asked on a particular enforcement notice issued by then MEPA, EC460/11, the spokesperson explained that this was withdrawn and replaced by EC071/19.

“However, EC071/19 was closed since all illegally placed caravans were removed from site and therefore no further illegality was detected.”

Caravans at Qawra
1 of 7

Newsbook.com.mt has been on both sites and photographed the situation. Sources have also forwarded photos regarding the situation at Mistra Bay.

Caravans at Mistra Bay
1 of 13

In March, it had emerged that numerous caravans which had taken over St Thomas Bay and the Żonqor area in Marsascala were given notice to clear the site they were illegally occupying. The information was supplied in Parliament. 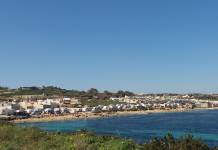 A person who spoke to this newsroom on the situation nearby Ta’ Fra Ben, noted that there are currently around thirteen caravans. He highlighted that some have been parked there for some four years now, adding that the number of the caravans was on the increase.

Speaking to this newsroom, the source said they informed the local council about the situation, which have reportedly replied that as long as they got wheels, they would eventually leave.

The source noted that the caravans lacked wheels and some individuals had resorted to installing an air conditioner and water supply.

As of this year, the owners of the caravans at Ta’ Fra Ben have also brought out their gazebos which are being set up on the pavement limiting access to pedestrians.

Once again, they resorted to the local council informing it that access in the area was being limited. The local council reportedly replied that it had informed the police about the situation.