The government is paying Captain Morgan €3,000 a day to host asylum seekers on one of its vessels, the Europa II, Home Affairs Minister Byron Camilleri confirmed.

The figure was provided in reply to a parliamentary question by PN MP Jason Azzopardi.

The Europa II was chartered to host a group of 57 individuals who were rescued from a rubber dinghy adrift within Malta’s search and rescue region late last month. Last week – shortly after Azzopardi’s question was filed – the government has also started to charter a second boat from Captain Morgan, the Bahari, presumably at similar rates.

No public call had been made to charter the boats from the company, which is owned by the Zammit Tabona family.

It was founded by Michael Zammit Tabona, who yesterday resigned from the post of non-resident ambassador to Finland after comparing German chancellor Angela Merkel to Hitler in a social media post. Malta will be formally apologising to Germany for his comments.

Malta’s Ambassador to Finland resigns after comparing Merkel to Hitler 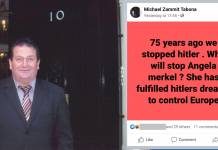