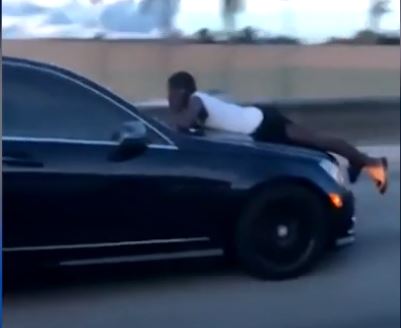 A man managed to call Police Officers while he was on moving car’s bonnet which was going at over 100km per hour.

The person who was driving the car was his former girlfriend.

They owned the car, and when his former girlfriend went to pick up her daughter, her former boyfriend got in front of the car and did not move. She decided to drive it altogether since he did not want to leave.

The man phoned the Police from the moving car with the call lasting for over 20 minutes, until the driver finally stopped and was immediately arrested.