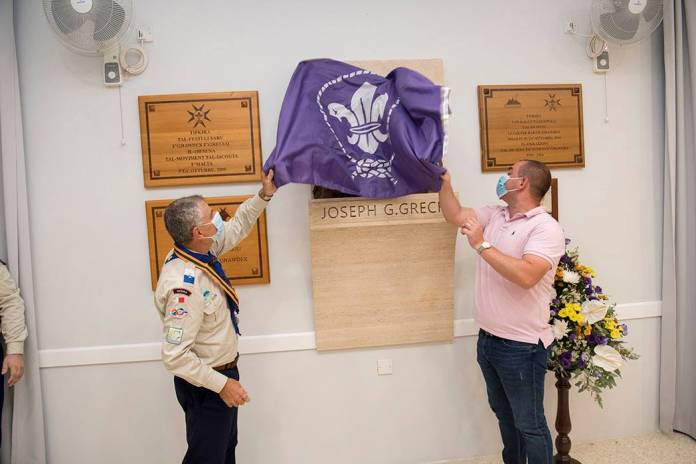 The name of Joseph G. Grech is synonymous with the Victoria Scout Group.

Better known as Skip, Grech was instrumental in the setting up of the Group in 1963. He served as its first Group Scout Leader (GSL) from its inception till 1990, when he was appointed Chief Commissioner of the Scout Association of Malta. After this appointment, he remained an active member of the Group council.

All over Gozo, Skip was well known and respected in various circles but his great love remained scouting and his ‘baby’, the Victoria Scout Group. Skip was also a member of various other Gozitan organisations. For various years, he was the President and the CEO of the Gozo Business Chamber.

His untimely death in September 2018 was a shock to many. So when Group Scout Leader Lorrie Saliba came up with the idea of putting a bust of Skip at headquarters, everyone welcomed the idea. In this way, he would return to the place he loved, and the present and future generations of Scouts would remember this person who dedicated his life to Scouting. For the past two years Saliba has been working hard to make it happen.

The unveiling ceremony took place on Saturday 19th September 2020. The bust in bronze is the work of young Gozitan artist Manuel Farrugia. It was cast at the Domus Dei 1963 foundry in Rome.

Due to the present Covid-19 restrictions, the number of guests physically present at headquarters was quite limited. Present were Anton Teuma, Bishop of Gozo, Minister for Gozo Clint Camilleri, Chief Scout and Chief Commissioner of the Scout Association of Malta Reuben Lanfranco and Anton Pisani respectively, Group Patron Dr Giovan Pace, Josef Schembri, Mayor of Victoria and a few council members and leaders. Members of Skip’s family were also present.

Since Scouts, parents and supporters (local and overseas) could not be invited to headquarters, the ceremony was streamed live on the Group’s Facebook page.

In their speeches, Group Scout Leader Lorrie Saliba, the Group Council Chariman Michael Grech and the group librarian Carm Cachia all narrated their recollections of Skip’s life – his hopes, the difficulties he encountered in setting up the Victoria Scout Group, the various initiatives taken so that the Group could continue to function, and his vision for his beloved Scout Group and for Gozo.

The Bishop of Gozo blessed the bust. The Group Council Treasurer, Gino Mizzi then presented a donation to the Bishop, which donation could be used for charity purposes. The Minister for Gozo, the Bishop and the sculptor were each presented with a copy of the book narrating the history of the group, by its author Carm Cachia.

A representative of the Catenians Group, Gozo presented Saliba with a donation towards the bust. Skip was a member of this association. A pleasant surprise was then in store for the Group Scout Leader, as a portrait was presented to him by the artist Manuel Farrugia.