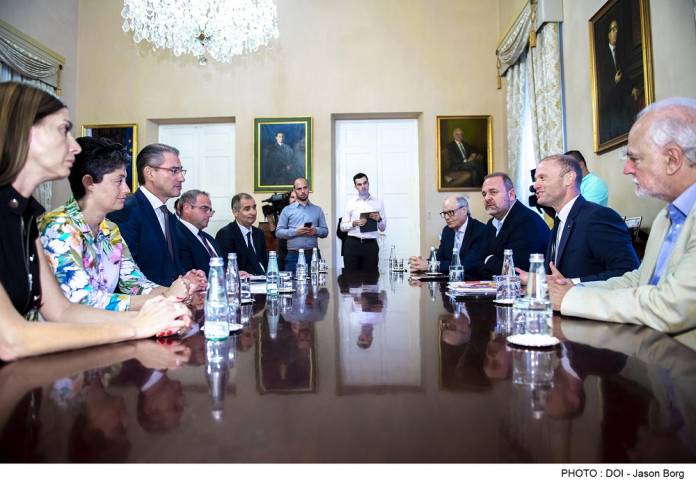 The President of the Malta Chamber of Commerce David Xuereb submitted 6 proposals to the Prime Minister aimed at protecting Malta’s economic success and future growth.

Among the proposals submitted yesterday included an analysis of labour-cost inflation vis a vis productivity. This was sparked by a combination of factors like leave allowances, rising labour mobility and labour shortages which were increasing labour costs. This was having the knock-on impact for the competitiveness of businesses.

The Chamber recommended that Malta, ‘needed to aspire for an industry vision driven educational system, which prepared our students for the jobs expected to be available tomorrow.’

The other proposals included the holistic effort to reform the rental market which deals with the ‘residential commercial leases and leases which pre-date the 1995 liberalisation of the rental market.’ On the financial sector, the Chamber recommended a ‘thorough cleansing of the Financial Services Industry’

They say that this could be carried out through the full implementation of the strategy Anti-Money Laundering and Combating the Financing of Terrorism, ‘without further delays’

Another key budget proposal put forward by the Chamber was to encourage the greater use of alternative means of transport ‘other than the one-car-driver model.’

On the topic of research, development and innovation, the Chamber recommended that the country put a special emphasis on this given that Malta ‘was seriously lagging behind in terms of expenditure on this sector’ as well as in the low number of STEM graduates from post-secondary and tertiary levels of study.

‘Hence the Chamber strongly recommended that Malta establishes a new Maltese Research Fund for competitive funding of basic and applied research, to be managed by MCST as well as a serious and tangible increase in budget for the MCST-run programme ‘Fusion’ in order for it to fully attain the desired results.’

Minister for Finance Edward Scicluna explained that the budgetary measures testified to the government’s efforts on tax and financial accounting as well as to government transparency.

John Paul Cordina   August 7, 2020
The government and employers have both argued in favour of allowing mass events with a capacity of up to 300 people at Thursday’s Malta Council for Economic and Social Development meeting, Newsbook.com.mt is informed.

John Paul Cordina   August 6, 2020
The Medical Association of Malta reported near-universal compliance with the industrial action it has ordered today after the government refused its calls to ban the holding of mass events.