British Margaret Keenan, 91-year-old, became the world’s first patient to receive the Pfizer/BioNTech vaccine second jab outside a clinical trial.
The grandmother had the booster injection at Coventry’s University Hospital on Tuesday. Three weeks after Ms Keenan received the first vaccination on 8 December.
According to figures published last week by the UK department of health 616,933 people have been vaccinated till 20 December. However, on Christmas Eve, Prime Minister Boris Johnson said that almost 800,000 people had been given their first dose.
The initial jabs were given in hospitals, but the rollout has since widened to GP-led sites and care homes. 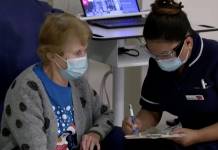 Q&A: Getting the Jab