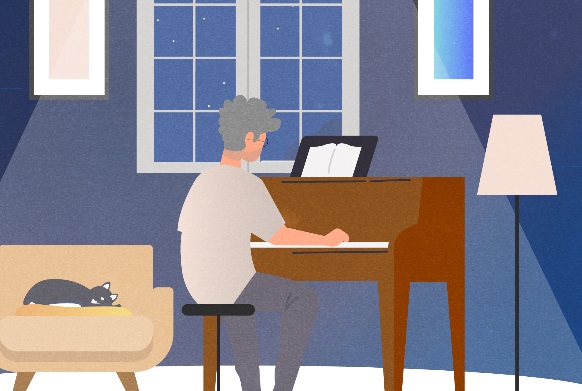 One of Malta’s most illustrious musicians, pianist and conductor Brian Schembri is playing a Beethoven masterpiece, the Hammerklavier sonata, in the Valletta Cultural Agency’s Beethoven at Home project.

These performances will take place in residential homes, celebrating Beethoven’s memory on the 250th anniversary of his birth; his company and music being enjoyed, admired and felt by those around him, during a relaxing evening.

In this series, the exact address to the performance venue will be communicated after a ticket is purchased, and, to instill the intimate feeling of a living room setting at the event, seats are limited. This sustains our efforts to maintain physical distancing. Sanitisation and prevention measures (including the wearing of masks) will be adopted in accordance with COvid-19 regulations currently in place. Prospective patrons are asked to follow these guidelines.

Brian Schembri started his music studies with his father Carmelo Schembri and later graduated in piano and conducting at the Kiev and Moscow “Tchaikowsky” Conservatories. He was Chief Conductor of the OPF Orchestra and the Orquestra Metropolitana de Lisboa and more recently, Teatru Manoel Music Director and Artistic Director and Principal Conductor of the Malta Philharmonic Orchestra.

He has recorded various CDs including piano recitals of sonatas by Beethoven, Schubert and Rachmaninov. He has received critical acclaim as an artist of high calibre for his strongly passionate and lyrical performances and has forged a strong reputation for a moving profound musicality.