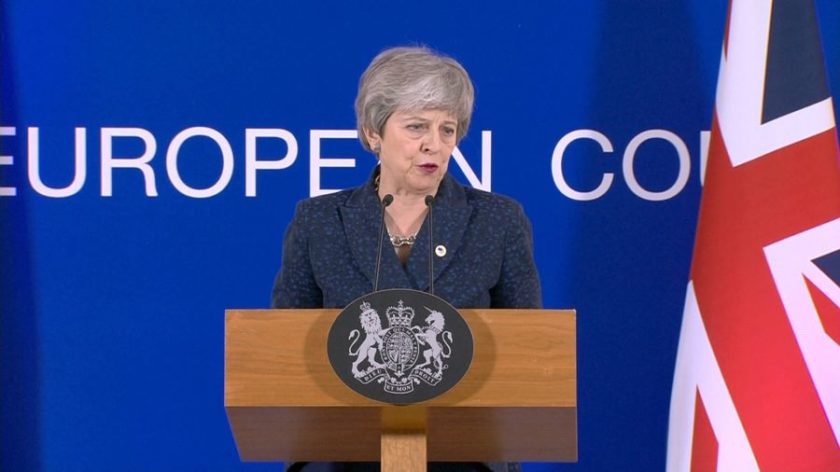 A deal has been agreed between EU leaders and the UK Prime Minister which will see a delay of Article 50 beyond the existing 29th March Brexit deadline.

If UK MPs agree the existing withdrawal agreement with the EU on Monday next week, the UK will be offered a delay up until the 22nd May (two months from time of this update).

Should MPs once again choose to vote down the third ‘meaningful vote’ on the deal, the EU will support a shorter delay until the 12th April. This is being offered to allow time for a majority to support the deal or otherwise to ‘indicate a way forward.’

It is understood that Mrs May and the European Council President Donald Tusk have agreed to these timeframes.

EU27 responds to UK requests in a positive spirit and:
👉 agrees to Art. 50 extension until 22 May if Withdrawal Agreement approved next week
👉 if not agreed next week then extension until 12 April
👉 approves ‘Strasbourg Agreement’
👉 continues no-deal preparations

In the press conference following the marathon discussions, the Prime Minister was asked to respond to the news of over 2 million people signing a petition requesting the UK Parliament to debate the revoking of the Article 50 and the cancelling of Brexit.

The Prime Minister responded by saying, ‘The 2016 referendum was the biggest democratic exercise in our history. It is important if we want to show that we can be trusted as politicians… it is our duty to deliver on that vote.’

When also asked about her comments blaming MPs for the difficulties leading up to this point, she said, ‘These negotiations have been tough, any negotiation involves a degree of compromise. I believe that we have got a good deal. The decision tonight is a very clear framework for MPs. We are at a decision point. I think UK citizens would rightly question why they might be asked to vote in the European Parliament elections nearly three years after voting to leave the EU.’

Brexit: UK could be granted extension until 22nd May, or less

A draft European Council document says that the United Kingdom could be granted a Brexit extension up until 22nd May, so as long as MPs vote in favour of the Prime Minister’s deal next week.

The document states that such a delay beyond March 29th was being considered by European leaders but that no extension would go beyond the European elections in May.

Discussions are currently still ongoing between European leaders with some rumours suggesting that the delay might in fact be reduced until the 7th May.  The Reuters News agency is also reporting that there could a be long delay until the end of the year.

I hear EU27 leaders are now discussing a #Brexit extension that ends on 7th May, whether the deal passes or not. Macron playing a big role, apparently.

The Prime Minister spoke to her European counterparts for 90 minutes explaining her reasons behind a delay until 30th June and to seek their support.

It is reported that she was questioned a number of times during her address over the UK’s contingency plans in the event that the third vote, the ‘meaning vote’ or MV3 as it is sometimes referred to, is voted down again.

Watch: PM in Brussels for a meeting of European leaders

Ahead of the vote, the French President Emmanuel Macron bluntly stated that there we be a No-Deal Brexit if MPs voted against the deal once more.

‘In the case of a negative British vote then we’d be heading to a no deal. We all know it. And it’s essential to be clear in these days and moments,’ he said.

The EU Brexit negotiator Michel Barnier once again stated that the delay ‘should be conditional on a positive vote next week in the House of Commons’ and that ‘now the solution is in London.’

By requesting a delay until the 30th June, the Prime Minister believes the UK would not be able to participate in the European Elections in May and thus leave just as the new Parliament session begins on the 2nd July.

The scheduled press conferences expected from the Prime Minister and Donald Tusk at 7PM Malta time, have massively overrun with statements that the discussions being carried out over dinner.

If Emmanuel Macron is right and the UK does reach a No-Deal Scenario, the UK military is preparing for the prospect.

Earlier this week 3,500 troops had been put on standby as part of Operation Redfold, a military operation prepared in the event of a No-Deal Brexit scenari

The efforts are part of the government entering ‘very high readiness mode’ in the event of a No-Deal, according to Sky News. These discussions are all being conducted out of the government’s nuclear bunker called Pindar.

This will mean that all planning for the UK’s No-Deal departure from the European Union will be transferred to COBRA, the government’s emergency committee.

Critical departments like health, transport and defence, which will be most affected by Brexit and its impact, will be manned around the clock. Resources and manpower will be distributed as necessary and will be supported by the complement of 3,500 military personnel.

As the military side of the Government’s no-deal contingency plans Operation Yellowhammer, the military help to transport and supply key resources like food and fuel around the UK. This will include a 200 man team that will drive tankers to distribute fuel to service stations.

Military bases are also set to become lorry parks in the event that delays are faced at ports as customs checks are carried out.