End of Timers in the US have a tradition of parading down prominent thoroughfares with a sandwich board proclaiming, “The End is Nigh”. The shenanigans in the House of Commons this week reminded me of this as the endgame in this particularly contorted chess game that Brexit has become, is truly nigh.

With the latest Brexit deadline of October 31 looming, the number of viable Brexit scenarios is shrinking. However, the decisions being taken in the Commons and the Lords are taking their time to filter to Joe/Josephine Public, as the results of the most recent YouGov survey, taken this week show.

Prior to now, surveys asked about what kind of Brexit outcome people want without consideration as to whether or not they believe they can get it. The new YouGov study has looked at which Brexit outcomes Britons think are still possible, and of those they think can still realistically take place which they prefer.

At present a no-deal Brexit is the outcome that the largest number of Britons think is still realistic, at 72%. A mere 7% of Brits believe that leaving without a deal is no longer a plausible possibility.

A majority of people (56%) also think that a Brexit delay past 31 October can still realistically take place. On this Leave voters tend to be less likely to see that this can still happen than Remain voters, at 47% vs 69%. 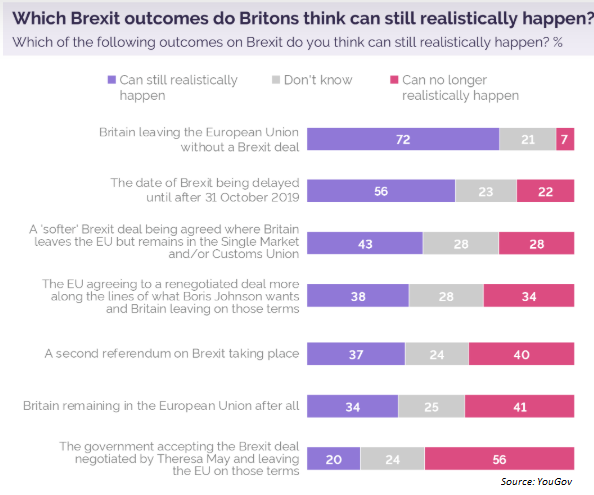 Elsewhere, more people think that a softer Brexit deal being struck could happen than a renegotiated deal more along the lines of what Boris wants (43% for the former, 38% for the latter). Another 37% think there is a realistic chance that a second referendum could take place, and 34% think that the UK ending up staying up in the EU is still plausible.

At the very bottom of the pile is the idea that Theresa May’s Brexit deal will ultimately be agreed, with just 20% of people seeing this as realistic.

It is clear that part of the reason for the current Brexit impasse is that those opposed to the government on Brexit still believe that their preferred outcomes are still viable. For instance, 70% of those who prefer a softer Brexit deal being agreed think this is still a possible outcome, while 58% of those who want to stay in the EU believe this can still be achieved.

Looking at the difference between Remain and Leave voters reveals that Remain voters are much more likely to think that Brexit outcomes other than the ones the government says it is willing to accept (i.e. anything other than a Boris-approved deal or no deal) are still realistic. There is only one outcome that Leave voters are substantially more likely to think is possible than Remainers – that the PM will successfully renegotiate a deal he is happy with and the UK will leave on those terms (52% vs 25%).

Having discovered which Brexits people think can still happen we then also asked Britons to say, of those outcomes they personally think are realistic, which they would prefer.

The Brexit outcome that Britons are most likely to think can happen AND want to happen is No Deal, at 21%. Close behind are a renegotiated deal along the lines of what Boris Johnson is seeking (19%) and remaining in the EU after all (19%).

A further 12% of Britons say that a softer Brexit is their most preferred option of those they see as realistic, with 10% saying likewise of a second referendum. 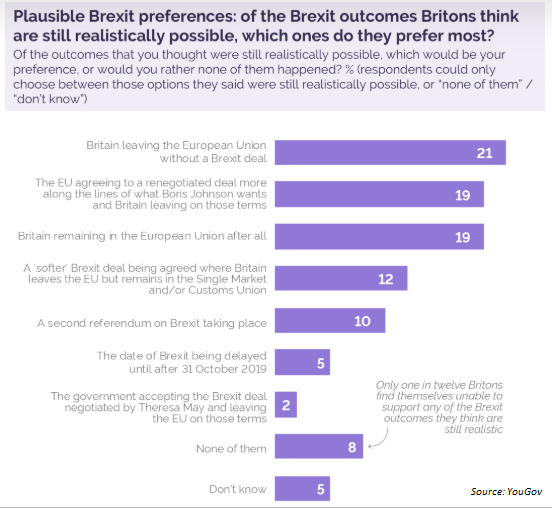 Only 8% of Britons find themselves in a situation where they don’t like any of the Brexit outcomes they think are realistic (although this could of course indicate that many have unrealistic expectations of their own preferred Brexit resolution).

Breaking down the results by voting group shows that those who currently intend to back the Conservatives are most likely to say that a renegotiated Brexit along the lines of what Boris Johnson is asking for is the plausible option they like the most (42%), with a further 35% preferring No Deal.

For Leave voters and Brexit Party supporters these preferences are flipped, with No Deal being the preferred plausible outcome at 41% and 59% respectively, with a ‘Boris Brexit’ being the second most commonly chosen at 31% and 30%.

Among Remain voters and those who intend to vote Labour or Lib Dem the top three hierarchy is the same: staying in the EU being the most popular still-realistic choice (35-42%), followed by a second referendum (16-18%) and then a Soft Brexit (14-15%).

Read Also: Both sides of the debate still tend to think they can achieve the Brexit outcome they want