None of the eight proposed options for Brexit have secured clear backing, after the British MPs voted on Wednesday evening.

The calls for a customs union with the EU were rejected by 272 to 264 votes. A call for a referendum to endorse any deal was also rejected by 295 to 268 votes.

Labour’s alternative plans for Brexit was also defeated by 307 to 237 votes.

The remaining five proposals failed to secure the backing of the majority of the MPs. These include the no-deal Brexit, stopping Brexit by revoking Article 50 and a proposal to remain in the European Economic Area.

Updated (2): Brexit: May says she will step down after deal is passed

British Prime Minister Theresa May has vowed to step down once the Brexit deal is delivered. May reportedly told the Tory backbenchers that she is ready to resign in order to do what is right for the country and the party.

Option B (Baron): Leave the EU with no deal on 12 April

Option L (Cherry): Revoke Article 50 if no-deal Brexit is not explicitly approved by MPs a day before we are due to leave

Option M (Beckett): Any Brexit deal must be put to the public in a “confirmatory” second referendum

Option O (Fysh): If no withdrawal agreement agreed, seek “standstill” agreement with the EU while negotiating trade deal. This is known as the “Malthouse Compromise Plan B”.

The Speaker John Bercow has instructed the members how the voting will take the vote and has also warned government not to present any stalling motions intended to delay proceedings.

Bercow torpedoed some hopes of Brexit deal vote this week

The speaker addressed his previous ruling, that the PM cannot bring back her Brexit deal for a third time without substantial change. He invoked a 400-year-old parliamentary procedure to do so, which blocks MPs being asked to vote on the same thing over and over again in a short space of time. 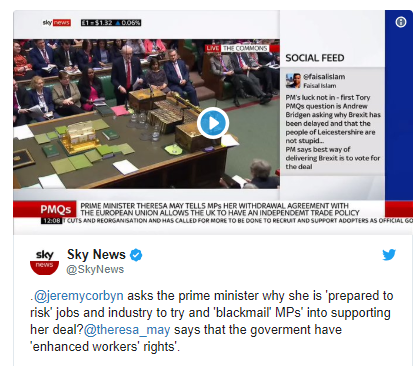 He confirmed that if, as some report, the deal could be brought back this Thursday or Friday, “I do expect the government to meet the test of change”.

He shot down one option, saying it “should not seek to circumvent my ruling” by tabling something called a “paving motion”, which would ensure a vote on the deal even if Bercow tried to block it.

May called to leave

The result of the division comes just after a heated PMQs (Prime Minister’s Question time) in which Labour leader Jeremy Corbyn called on the PM Theresa May to leave. He accused her of blackmailing MPs and of knowingly jeopardising jobs.

John Bercow and the Brexit Bingo 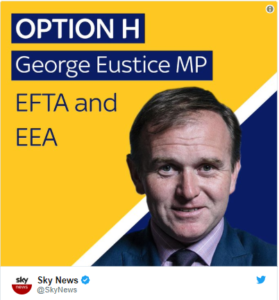 Inimitable Speaker John Bercow has, almost incredibly managed to whittle down the 16 option proposals tabled for indicative voting to eight while keeping the range of options as wide as proposed by the various MPs: from no-deal to full blown withdrawal of Article 50. One potential ‘outsider’ in this array of choices is the introduction of the Norwegian model which places the UK in the single market, keeping its own regulations aligned but outside the EU customs union so able to conduct it’s own trade deals.