A defiant Boris Johnson said he would not negotiate a further delay to Britain’s departure from the European Union after parliament voted on Saturday to postpone a vote on his Brexit deal.

Parliament voted 322 to 306 in favour of an amendment put forward by Oliver Letwin, a former Conservative cabinet minister.

According to legislation passed earlier, the vote means Johnson is obliged to write to the European Union seeking a delay beyond Britain’s scheduled departure date of October 31.

But Johnson has repeatedly vowed he will not do this and on Saturday he stuck to that line.

“I will not negotiate a delay with the EU and neither does the law compel me to do so,” Johnson told parliament.

“I will tell our friends and colleagues in the EU exactly what I have told everyone else in the last 88 days that I have served as prime minister: that further delay would be bad for this country, bad for the European Union and bad for democracy.”

The vote however means the government will not hold a vote on its Brexit deal on Saturday as planned. Johnson said he would put it to a vote on Tuesday.

A law passed by Johnson’s opponents obliges him to ask the EU for a Brexit delay until January 31, 2020 if he could not secure approval for his deal by the end of Saturday.

“My aim is to ensure that Boris’s deal succeeds,” Letwin said earlier. But he wanted “an insurance policy which prevents the UK from crashing out on 31 October by mistake if something goes wrong during the passage of the implementing legislation”.

Conservative MP Oliver Letwin has put forward an amendment to Boris Johnson’s deal which could potentially block the deal and delay Brexit until January 2020.

Letwin had supported an anti no-deal legislation known as the Benn Act.

The amendment says the House would “withhold support” from Johnson’s plan until all of the legislation required to implement the bill is passed by Parliament as well.

It would force Johnson to request a Brexit extension on Saturday night, as per the Benn Act, and remove the risk of no deal in a few days’ time. But it still allows Johnson to pass his Brexit deal — he just has to pass all the separate parts of the Withdrawal Agreement as well.

The amendment was co-signed by Nick Boles and Liberal Democrat leader Jo Swinson who is against Brexit altogether.

The Letwin amendment delays a decision on Boris Johnson’s Brexit deal and rules out a no-deal Brexit on 31 October.

The Prime Minister is now also forced to seek an extension to Brexit tonight.

Johnson reiterated his support for the new Brexit deal, saying that he hopes that the MPs will accept his deal next week in “overwhelming numbers”.

Labour leader Jeremy Corbyn said that parliament has spoken, and that Johnson has now to comply with the law. He also asked Johnson to reconsider what he just said about not asking for an extension.

SNP leader Ian Blackford asked the speaker what can be done to ensure that the government complies with the law and the Benn act.

Lib Dem Jo Swinson says that the people deserve a final say on the matter. She asked the speaker to suspend the House until Johnson sends his letter asking for an extension to the EU and then confirm that he has sent it. The request was turned down.

Johnson plans to push through the deal in parliament, so that the UK can leave the bloc by 31 October as planned. However, even if the deal goes through, Johnson could face an extension.

His former DUP allies and Opposition plan to vote against the deal. The Conservative and Labour MPs will table an amendment allowing parliament to withhold its approval until the legislation to implement Brexit has passed.

After securing a last minute deal on Thursday by agreeing to a customs border on the Irish sea, Johnson spent his time trying to convince MPs to support the agreement.

The vote is expected at 3pm, however, this depends on which amendments will be discussed. 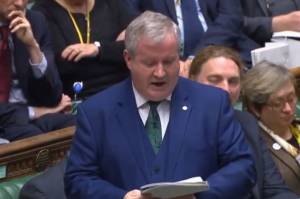 SNP leader Ian Blackford said that the deal gives Northern Ireland a competitive advantage over Scotland. He observed that Northern Ireland is effectively being kept in the customs union, which is what Scotland wanted.

“The Scottish fisheries sold out by a Tory government,” Blackford said.

The SNP at the Westminister warned that this is the beginning of the end of their precious Union. He spoke about Scotland’s ambition of becoming an independent European nation, urging European to “leave a light on for Scotland”.

As the debate is underway in the House of Commons, thousands of anti-Brexit protestors are gathering in London. At the start of the protest, young Greens co-chair Rosie Rawle said:

The people gathering in central London are calling for a “final say” vote on the new Brexit deal. The organisers of the “People’s Vote” campaign say that they want a final vote on the deal to check whether the UK is “happy” to leave the EU under the terms negotiated.

Brexit supporters are expected to stage a protest in Manchester on Saturday.

Sylvana Debono   January 28, 2020
A cautious sense of optimism tempered by a harsh reality of increasing costs was evident in the results of a Business Performance Survey carried out by the Malta Chamber of SMEs.

Amy Borg   January 29, 2020
German MEP and European Financial and Economic Policy spokesperson Sven Giegold stated that the European Commission must get serious and start a dialogue with Malta on the rule of law under Article 7 and initiate a number of specific infringement proceedings. In a press statement, Giegold said that it is not enough for President von der Leyen to simply encourage Malta’s Prime Minister to continue reforms.

“Chances of new start under PM Abela have already diminished” –...

Watch: A strong Europe in a world of challenges