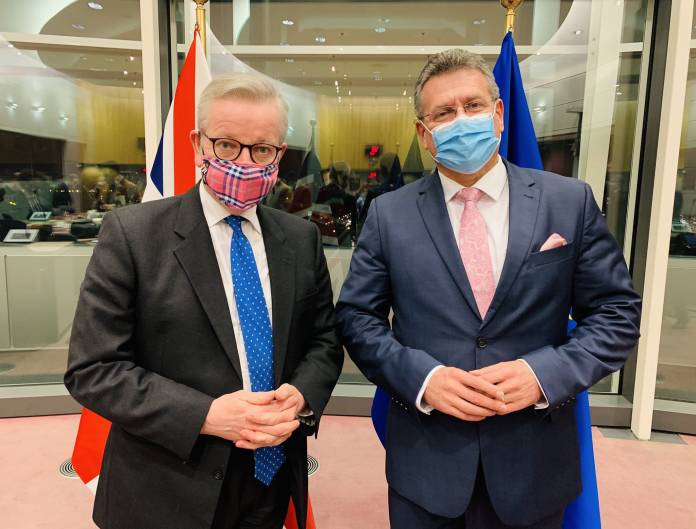 Following intensive and constructive work over the past weeks by the EU and the UK, the two co-chairs announced their agreement in principle on all issues, in particular with regard to the Protocol on Ireland and Northern Ireland.

The co-chairs of the EU-UK Joint Committee – European Commission Vice-President Maroš Šefčovič and the UK Chancellor of the Duchy of Lancaster, Michael Gove yesterday held a political meeting to address the outstanding issues related to the implementation of the Withdrawal Agreement.

An agreement in principle has been found in the following areas, amongst others: Border Control Posts/Entry Points specifically for checks on animals, plants and derived products, export declarations, the supply of medicines, the supply of chilled meats, and other food products to supermarkets, and a clarification on the application of State aid under the terms of the Protocol.

Ensuring that the Withdrawal Agreement, in particular the Protocol on Ireland and Northern Ireland, is fully operational at the end of the transition period, i.e. as of 1 January 2021, is essential. The Protocol protects the Good Friday (Belfast) Agreement in all its dimensions, maintaining peace, stability and prosperity on the island of Ireland.

Prime Minister Boris Johnson and the European Union’s Ursula von der Leyen will meet later on today, in Brussels, to try to unlock the last hurdles in the Brexit trade deal talks over dinner, the British government said on Tuesday.

“The PM will travel to Brussels for dinner with VDL to continue discussions on the future relationship between the UK and the EU,” a spokesman from Johnson’s Downing Street office said.