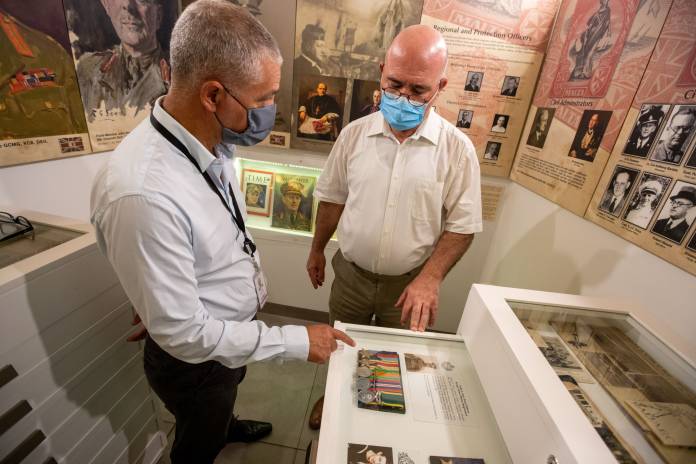 Fondazzjoni Wirt Artna, in collaboration with Bank of Valletta, have launched The Historic Medal Chests, a collection of military medals awarded to Maltese nationals or people who served in Malta during World War II.

These medal display units can be viewed by the public when visiting the Malta at War Museum in Vittoriosa, Fort Rinella in Kalkara and the Lascaris War Rooms in Valletta.

The medal collections are displayed according to the direct relevance to the respective museum. For example, those at the Malta at War Museum include the medals of service people who served during the 1940 – 1943 Siege of Malta. Each medal set is accompanied by a portrait and a short biographical note about the recipient and the emblem of the Unit in which the recipient saw action. Almost all medals on display were donated by their families.

Charles Azzopardi, Executive PR and Marketing at Bank of Valletta, met with Mario Farrugia, Chairman and CEO of Fondazzjoni Wirt Artna for a preview of the medal collection.

“We all know about Malta’s crucial role and gallant resistance against great odds in World War Two and this was formally recognised by the award of the George Cross in April 1942,” said Farrugia, “This collection is representative of those very individuals who were at the core of that titanic struggle against the full might of the Axis.”

‘Some of these medals are rare and unique and were awarded to some very extraordinary individuals who faced terrible ordeals to defend their country,’ continued the FWA Chairman. ‘We take this opportunity to urge the public to visit the Malta at War Museum, and view this new addition, among the thousands of historic artefacts there that help us understand what life was like in Malta during World War Two.’

“During the current challenging times, we must not forget our past, and the tribulations our nation went through, throughout our colourful history,’ said Charles Azzopardi, “Besides providing additional support to the economy and businesses during the COVID-19 pandemic, Bank of Valletta has continued to support Maltese culture through its extensive community programme. The bank’s relationship with Fondazzjoni Wirt Artna can be traced back for a number of years, where together we have completed numerous historical projects.”

More information about Fondazzjoni Wirt Artna and its museums can be obtained here.

This content was supplied by the Bank of Valletta