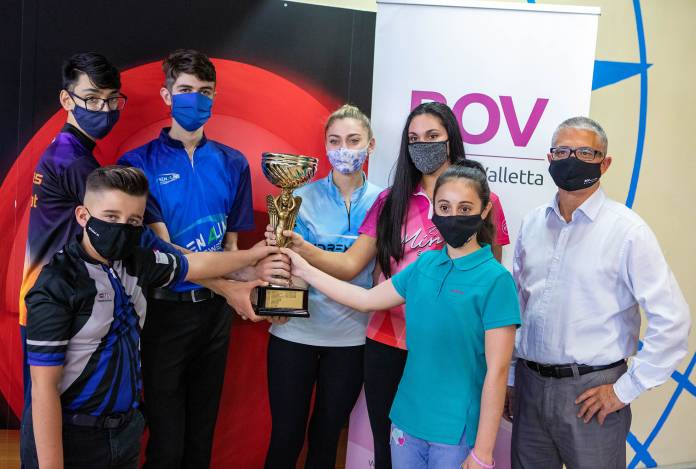 Matthew Magro won the BOV Bowling National U23 Championship, with Sara Xuereb winning her 8th consecutive title in this category in dominant style. Nicholas Muscat and Ruslana Grima were crowned winner in the U16 Category while Nicolai Mallia and Karlise Bartolo won the U12 category. The championships were organized by the Malta Ten Pin Bowling Association and played at the Eden Superbowl.

The male under 23 Championships saw some particularly high scores, with last year’s under 23 and under 16 winner Nicholas Muscat racing ahead with a 2705 total over 12 games that featured a new under 18 record of 1357 pins (226 average)  over 6 games.

12 year old Kayden Lagana also had a brilliant 2460 series, and qualified in 2nd for the under 23 behind Muscat just ahead of Matthew Magro. Reuben Scerri, Kyle Camilleri and Miguel Xuereb also qualified for the top 6 finals. Muscat’s huge lead was not enough to keep him in first place as 18 year old Magro played an outstanding 1192 series over 5 games, with a 238 average to win all 5 games and shoot up to first. This series is the second best ever 5 game series by any local player.

Lagana’, held on to 3rd place just 11 pins ahead of Xuereb and went on to face Muscat to see who would challenge Magro in the final.  Muscat could not however find the previous form and lost 171-202, and Lagana’ went on to face Magro.  He pushed Magro all the way, but at the end it was a well-deserved first under 23 title for Magro, as he pulled away 217-202.

Sara Xuereb dominated the female group proceedings from day 1 to win her 8th consecutive under 23 youths to continue dominating the field. Playing a 217 scratch average over the 12 games in the qualifiers, she led Ruslana Grima and Karlise Bartolo into the round robin, ahead of Rachel Chircop, Celianne Micallef and Mia Bugeja. The top 3 did not change positions after this round robin, with Xuereb winning all her 5 matches, Grima winning 3 and Bartolo winning 2 of the matches. This meant that Bartolo faced Grima to determine who would face Xuereb in the final. A neck and neck race to the finish line saw Grima win by just 1 pin over the plucky 11 year old Bartolo.

Grima then faced Xuereb in the final. After gaining a small early lead, Grima saw this fade away as Xuereb hammered in 4 strikes in a row at the end to win 203-172.

In the under 16 category, Nicholas Muscat defended his title with that record breaking performance and finished ahead of Lagana’ and Chris Fenech, Ruslana Grima had no real challenges as she emerged comfortable winner with a strong 192 average over 12 games, well ahead of Bartolo and Celianne Micallef. This was Grima’s 3rd under 16 title in a row.

In the under 12 category, Nicolai Mallia just edged out his friend Tomas Caruso by 10 pins while 3rd place went to Matthew Bonello.  Karlise Bartolo easily won her category with 1224 pins to Charlize Bartolo’s 965. Jade Barbara was 3rd with 826 pins.

The Highest games played were both a 290 by the under 23 champions, Sarah Xuereb and Matthew Magro.

Charles Azzopardi, Executive PR and Marketing at Bank of Valletta presented the trophies to all the winners while congratulating the future crop of top Maltese bowlers.