UK PM Boris Johnson has been moved out of intensive care but remains in hospital.

“The prime minister has been moved this evening from intensive care back to the ward, where he will receive close monitoring during the early phase of his recovery,” said Downing Street.

No 10 said that Johnson was  “in extremely good spirits.”

According to The Guardian, Dominic Raab, who is deputising for Johnson, had earlier said the prime minister was making “positive steps forward”. 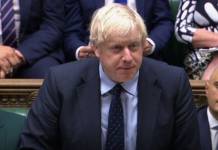