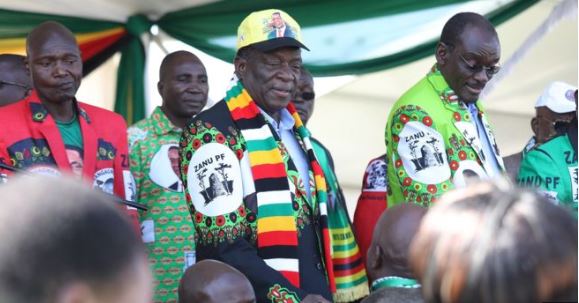 Zimbabwe President Emmerson Mnangagwa escaped unhurt after an explosion rocked a stadium where he was addressing a political rally on Saturday, a month before the country is due to hold its presidential elections.

However, vice presidents Constantino Chiwenga and Kembo Mohadi and a minister sustained minor injuries following the blast at the White City Stadium in the second city of Bulawayo.

“We are still to get information on what exactly happened as we understand that some people could have been injured as this happened in the VIP tent.”

National Police spokeswoman Charity Charamba said she did not have details on the incident.

Footage from Zimbabwe state television showed the explosion took place near Mnangagwa as he waved to supporters. He was later seen in pictures circulating on social media visiting Chiwenga’s wife in hospital.

Mnangagwa was speaking at his first rally in Bulawayo, an opposition stronghold where the ruling ZANU-PF has not won in national elections since 2000.

Zimbabwe holds its presidential election on July 30, with 75-year-old Mnangagwa and 40-year-old Nelson Chamisa, the leader of the opposition Movement for Democratic Change, the main contenders.

The vote next month is the first since Robert Mugabe’s downfall after a de facto military coup last November.

Unlike previous elections which were marred by violence, mostly against opposition members by ZANU-PF supporters, the run up to this year’s vote has been relatively peaceful.

Mnangagwa said last August, then the vice president, that he had been poisoned at a rally outside Bulawayo and spent weeks receiving medical treatment in neighbouring South Africa.

Zimbabwe last had blasts at rallies in the 1980s, which had targeted Mugabe.

Zimbabwe opposition leader: ‘my hands are clean’ in post-vote violence