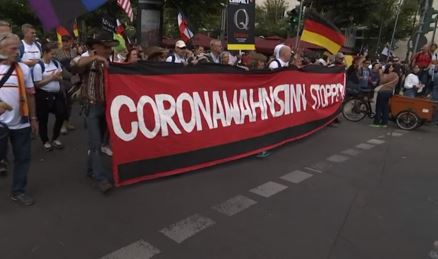 I have not posted anything for the past few days in order to let the numbers take their course. In one of the last posts I wrote that we could be witnessing another trough for daily numbers of new cases followed by another wave, or we have started a good downward trend. From the epidemic curve (with a two-day interval) it is now clear that we went through a trough and today’s numbers give another sharp peak, creating the third wave of this second phase. Comparing the first and second phases  we can see that our daily numbers behave in this peculiar fluctuating manner. But the waves we are going through this time are higher and therefore most likely to be more persistent. 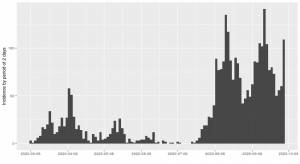 The second figure gives a time series analysis of the daily figures in this second phase based on a two-day moving average. The black curve joins the actual  data points and the red curve the fitted model which gives a forecast for tomorrow of 48 but with a very wide prediction interval. The blue line gives a regression fit to these models which shows an increasing trend but with a very small gradient of 0.32, that is, on average, the daily numbers are estimated to have gone up by about one case every three days. So, bleak as the situation feels today, we are still far from the exponential increase  which is feared by all epidemiologists, but the figures nevertheless indicate that the successive waves are not yet pointing towards an overall decline, as they did in the first phase. So we are essentially in the same position we started off with at the start of this second phase. These forecasts, however, as I have often repeated, are made under the assumption that all conditions pertaining throughout this period remain roughly the same. 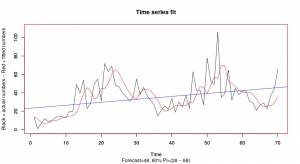 But why do our figures show such a fluctuating behaviour? Epidemiologists do not have a complete answer to this complex phenomenon, but I think two explanations often put forward might apply to our population. Firstly, it could be that the ebb and flow of daily numbers is a result of the virus’ incubation period which presents us with new cases in waves. Another reason could be related to the nature of our network of contacts. We all live within clusters: the family, the workplace, or a neighbourhood, for example. Links within these clusters are dense, and we can call them short links. However, we do have links, perhaps not so numerous and not so dense, with people from other clusters, which we can call long links. Some theoretical work and also some experimental simulations have indicated that an epidemic could flow through such a population in a wave pattern: peaks while spreading through clusters followed by troughs while it is transmitted across clusters via long links. And our population being small, and hence our daily number of cases also small, makes our data more sensitive to fluctuations, whatever the mechanism causing them, so these show up more clearly than within much larger populations