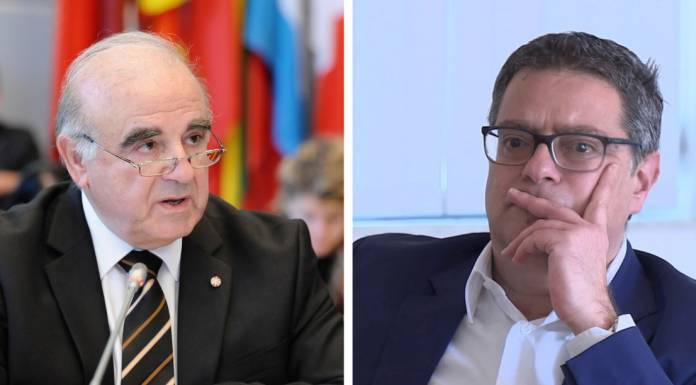 According to the Constitution of Malta, it is the President of Malta who appoints the Leader of the Opposition. S/he has to enjoy majority support within the parliamentary group. This majority support has to remain throughout the whole legislature.

Once this is no longer the case, then it is incumbent upon the President (i) to ascertain that this is the case; and, if so, (ii) to replace the Leader of the Opposition. The Constitution does not outline the exact procedure to be followed by the President. In such cases, the President would have to rely on past constitutional practice to guide him. Once there is however none, then he has to exercise his reasonable discretion to decide how to proceed.

However, it is one thing to have both posts filled for a short transitory interim duration as stated above, and it quite a different matter if both posts are filled by two different persons during a legislature or a substantial part thereof.

Indeed, the Party Leader can exercise more control on the government within the House of Representatives than outside, more so if there is a change of government within one and the same legislature such that the Leader of the Opposition – following a government defeat – moves on to become Prime Minister. This is of course currently remote but constitutionally possible and did occur in the past.

This problem is further illustrated by the fact when Leader of the Opposition Dr Simon Busutill had, for the first time in constitutional history, drew the Shadow Cabinet both from MPs and MEPs, the latter were hampered in the exercise of their shadow government duties as they were not members of the House.

President can act in two stages

As I see it now there are two stages: (i) ascertainment of whether Dr Adrian Delia enjoys majority support of the Nationalist Party Parliamentary Group which appears to be relatively clear. If such is the case, the President takes no further action and the matter stops there. If such is not the case, the President has to remove Dr Adrian Delia from Leader of the Opposition. In the latter eventuality, a new Leader of the Opposition has to be appointed.

All these have to be worked out as we are in unchartered territories. We will have to see what will the President will do now that the ball is in his court.