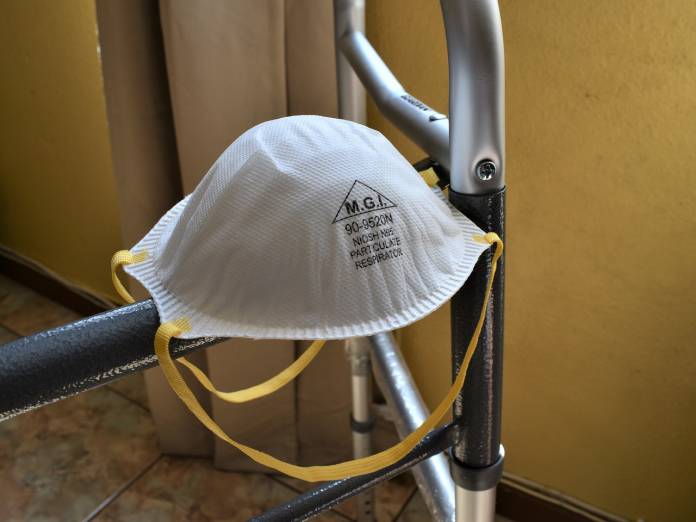 This is the 100th day since the second phase of the epidemic started in Malta with 14 new cases on the 26th of July. Since then it has been a rollercoaster ride with daily new numbers going up and down, making predictions very difficult to make. Fluctuations due to chance have a greater impact on our relatively small numbers so maybe that is why we are seeing a stronger ebb and flow than with figures from larger countries. But these last couple of weeks were more worrying than usual. As the epicurve shows, we are in the third wave of this second phase, we were hoping that it would subside as did the others before it, but apart from a few days lull, which gave us hope, the figures for the past two days have again turned the tide. Now the epicurve seems to be reaching for greater heights than its predecessors, and one can only hope that this latest spike is random fluctuation not a harbinger of the next few days. 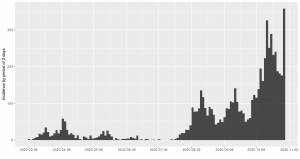 Moreover, the number of active cases are still on the increase except for two days at the end of October when there were more recoveries than new cases. The time series shows the way these numbers have been recently going up except for these two days.  It is these numbers which could make or break the health system, and therefore all of us. 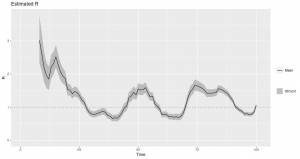 For those who are curious about the R-factor, here is a graph with my estimates (obtained using the EpiEstim package developed at Imperial College, Lond). This also shows the bewildering ups and downs of this epidemic, but now this number has risen to above the threshold of 1. However, even if we maintain an R-factor a little less than one, and the number of new active cases keeps increasing at a constant, although far from the disastrous exponential increases, our health service could still be close to breaking point with currently close to 2000 active cases (although most of them not needing hospitalisation). We must bring this number down, that is, the number of daily new cases must be brought down to a lower value than the number of recoveries. 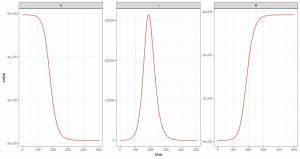 But finally, let me take one scary look at what some epidemiologists are seeing which makes them advocate measures like total lockdown. If one looks at the second time series below of daily active cases we have registered, one can see a red curve. This is an attempt to fit one of the simplest epidemiological there are, which considers the population partitioned into the Susceptible,   the Infected, that is, our active cases, and the Removed, because they have either recovered and now enjoy immunity or have succumbed to the virus. This fit giving by the red line is quite conservative, generally less than our registered numbers. But suppose the model is allowed to run its course. The figure above showing three panels shows this. The central panel is the number of active cases predicted by the model. We are at the bottom, on the hundredth day. But look at the peak of that central curve! This is the result of exponential growth, which Einstein called the eighth wonder of the world. 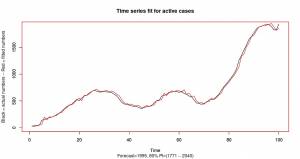 I do not for one moment believe that we will be going anywhere near what this graph shows. First of all, we are not sure that our numbers will continue with that trend. Moreover, if drastic growth like that happens we will not sit idly by and watch it grow. And anyway this is a mathematical model based on many assumptions. However, these scenarios are happening in large countries, and we cannot just wish them away. Many epidemiologists believe that we can beat these numbers without total lockdowns, but only if we act well and in anticipation, not as a reaction when the measures required might have to be more painful. Also, the fluctuations in our COVID numbers should also be a source of encouragement. Maybe they were not solely due to chance. Maybe the peaks corresponded to when we were not careful enough, meaning that if we are, we can regain the troughs if we do not leave it too late. 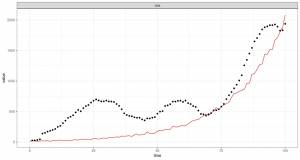