One of the most important types of graphs which epidemiologists use to track an epidemic is the so-called epidemic curve, or epicurve, for short. Time is divided into non-overlapping periods of equal length and the total of new cases for successive periods is plotted. This is a bit different from a moving average, because no average is taken and because the successive time periods do not overlap. The length of each time period is usually taken to be around one-quarter of the incubation period of the pathogen being studied. For the epicurve recording the Maltese numbers of new cases I have taken this time period to be two days. 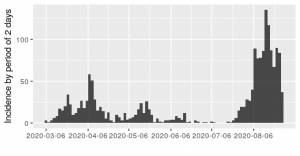 The epidemic curve shown here is a textbook example of what such a curve should look like: successive peaks separated by roughly equal time lags, which is here usually six or four days. This separation is generally an indication of the incubation period, and it is remarkably the same in the first wave and the second. This regularity and the downward trend we are in is definitely a source of comfort for the health authorities since there seem to be no surprises, no outliers, no sudden jolts, therefore the measures of containment taken appear to be working as best as one would hope for. The health authorities would have the data to compare epicurves for different sections of society, stratified by age or gender, for example. This would help them, even more, to make sure they have a good grip on the situation.

What should we expect in the next few days? If the pattern persists, perhaps another day tomorrow with a lower number of new cases but then another spike of one or two days, smaller however than the previous one, followed by further dips. This would indicate that we are on the right track.

But this does not mean that the COVID virus is behaving itself properly according to some pre-set pattern. If it were for the virus the numbers would keep growing exponentially until it would not be able to find enough new victims to help it propagate further. This pattern means that we are behaving ourselves properly and that, in general,  we are obeying instructions from the health authorities. So we can only credit ourselves for any success. But if we lower our guard, especially when we see the number of new cases dwindling, then we will only have ourselves to blame for the consequences.