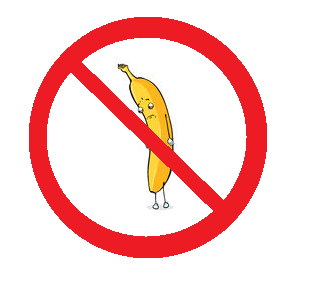 Allow me to start this by saying that I do hope you’ve spent your Valentine’s Day with someone who loves you as much as Edwin Vassallo loves making a fool of himself; in my case, I spent it facepalming and fuming.

Just in case you missed it, on the 12th of February, an elected member of our Parliament by the name of Edwin Vassallo shared a post on Facebook which stated that ‘a groups [sic] of people is injecting fruits with blood containing HIV and AIDS.’ The post went on to say that ‘This is Satanism’ and to ‘PLEASE SHARE this post and save others’. To top it all off, the post also included two pictures of bananas – one of which was shown being injected with HIV-contaminated blood because, you know, ‘Satanists’ are known to upload Instastories of their masterplans. No, honestly, I despair. 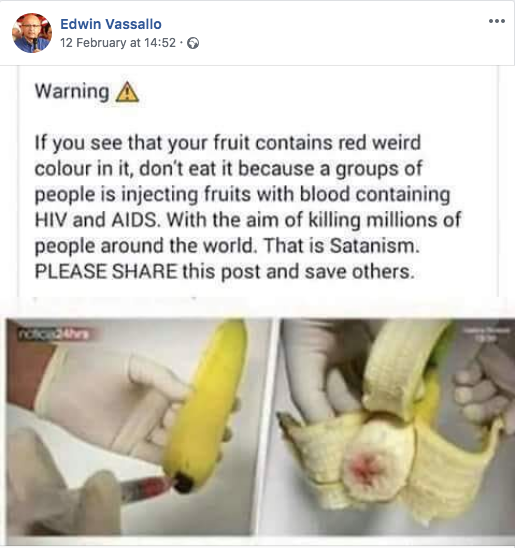 These are the sort of standards we have become accustomed to when it comes to our politicians: a bunch of charlatans who do and say whatever the hell they want regardless of the effect it will have on members of society. Particularly on those they should be helping and protecting.

So, let’s start from the very beginning: HIV cannot be transmitted through food or saliva. In fact, the virus dies almost instantaneously once it comes in contact with air, which is why it needs direct access to a mucous membrane or damaged tissue to be able to infect another person. In short, you can’t get HIV by eating a banana, and, even in the impossible scenario that a banana might offer incubation to the virus (it can’t!), the acid inside your stomach would destroy it anyway.

But that is not the issue here.

Unfortunately, when people in Vassallo’s position share this sort of mumbo-jumbo, they don’t only make fools of themselves, they also encourage others to believe untruths. These untruths then go on to shape their opinion of people who live with HIV and also of communities which are stereotypically associated with the virus.

Someone in Vassallo’s position should be using his voice and reach to educate, not to spread misinformation. He should use his voice to remind the Government that people in this country still cannot get their hands on affordable, generic PrEP (medication which dramatically reduces the chance of contracting HIV, and which in Malta retails for the price of €672 for a month’s supply) and that there are no support groups for those living with HIV.

Moreover, Vassallo should be dispelling the stigma that still surrounds HIV: in 2019, it is a condition that can be lived with until old age if the person takes the medication as instructed. Indeed, if they take treatment for six months, the level of the virus might even reach an undetectable level, meaning that they cannot transmit the virus to another person – given that they continue taking their medication regularly, of course.. Also, since we’re on the subject, it’s about time that people living with HIV in Malta had access to the latest medication (i.e. one pill a day as opposed to six!).

The worst part of it all, however, is that Vassallo shared this post in good faith. As the saying goes, the road to hell is paved with good intentions, which brings us to two very important questions: How can we let someone who is so gullible and ignorant of the facts have a voice in our Parliament? How can we let people like this shape our laws and lives?

Realistically, this post should have been enough for Vassallo to hand in his resignation; it also makes the Partit Nazzjonalista look incredibly bad in the eyes of those it has already shrugged off and disappointed in the past, something it really shouldn’t want or can afford. But seeing as the only thing that is big and bad enough to get someone to resign or be removed in this country is a tuna-related scandal *pause to LOL*, then I doubt this will.

However, next time you see Edwin Vassallo vote in Parliament or argue his case – like he did when he voted against the Marriage Equality Act in 2017 – remember that it may all be based on baseless misinformation he picked up on social media. Because, apparently, that is the best we should expect from the people representing us in Parliament.