The highlight (or rather, the low point) of this week was definitely when 106 new COVID carriers were identified in one day. As regards spread into the wider community, the magnitude of that number might be not so consequential, since most of them appeared within a few care homes and so could be more easily contained. As regards loss of life among the elderly, the outbreak seems to be taking its toll and at this stage, we just have to wait and hope for the best while doctors are trying to save lives. 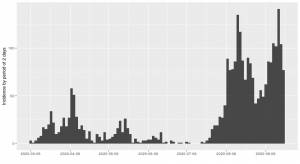 Today’s epicurve (with the usual two-day interval) in fact does indicate that that high figure could be considered an anomalous occurrence in the general spread of the virus, so we can try to consider the epicurve while ignoring its last high column. First of all, as I have been saying, it is something of a misnomer to talk about the first and the second “wave”. The first phase consisted of four waves. I had hoped that this second phase would consist of just the one wave we were on a couple of weeks ago. But now it is clear that it will take at least two waves. However, we seem to be going down the second wave which, if we ignore the anomalous result, would have had a lower peak than the first. And we seem to be where we were around eight days ago but going down a bit more rapidly. I cannot explain why we have this undulant variation. Maybe it is an effect of the incubation period of the virus which is sending us new cases in waves. Maybe these waves are a consequence of the periodic sequence of long weekends which we had and which made us lower our guards. 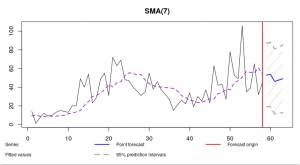 And it is also difficult to make exact predictions from these data. I’ll try three ways, using only the data from the second phase. First, a time series employing a sliding window of two days: this gives us a prediction of 39 cases for tomorrow but with a very wide 95% prediction interval between 4 and 72, indicating the level of uncertainty which the up and down movements have created. Then I tried tackling the time series with a 7-day sliding window, as the Superintendent of Public Health showed in her press conference. This does smooth out the fluctuation of numbers, but it gives a forecast for tomorrow of 53 cases with an equally wide prediction interval between 19 and 87. Personally I prefer the 2-day window, (or even a 3-day window which predicts 47 cases) not because they predict a lower number but because of other characteristics of the series which would be too technical to go into here. But all this shows the level of uncertainty which one gets going solely on these numbers. 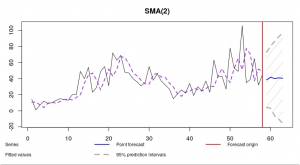 Finally, one can attempt to fit the parameters of well-known epidemic models on our data. This is a very difficult task and practically a scientific endeavour in itself. There are many parameters involved, and it requires specialised skills in handling their uncertainties. The last graph shows a simple attempt to fit the SIR model on our data, starting with an initial R0-factor of 1.5 and assuming that a person who gets the virus remains infectious for ten days before being isolated. The red line represents the model fit and the black dots our data. One can see that while, for several days, we were above the prediction line, we are now registering less new cases than the model predicts, which would be good news. 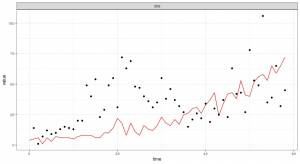 So a measured uncertainty is probably what is guiding our epidemiologists who are responsible for tracking the epidemic and suggesting what measures to take. In a week’s time, schools will open and the conditions prevailing today might probably no longer hold. That can put a further twist on the difficulty of predicting how the epidemic will develop.