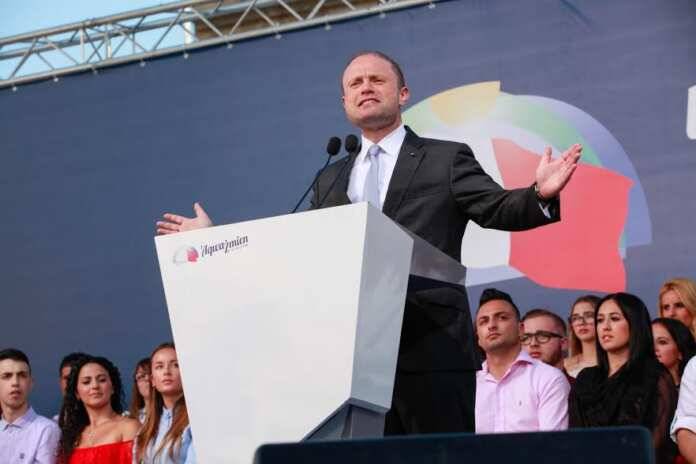 Where does one even start? So much has happened since last Monday that it all feels like one long nightmare. Even so, one event is conspicuous by its absence: the kicking-out of Joseph Muscat.

On Tuesday, as the news flooded in and we waited with bated breath and in the dark, courtesy of a nation-wide power cut (pun intended, really), I was one of the people who went to Valletta to protest. The situation, in Daphne’s now-immortal words, had long been ‘desperate’, but it was finally coming to a head. All I could do was make sure that those in power saw that some of us wouldn’t sit around and clap as they did the absolute bare minimum three years too late and only when things had got so bad that they could no longer ignore them.

How has Joseph Muscat not been kicked out by his Cabinet – or, at least, been forced to resign – yet? How can he expect people to give him the benefit of the doubt when he has been so outspoken in defending those who are now being directly implicated in Daphne Caruana Galizia’s assassination? How can he genuinely believe that people aren’t finally seeing through his web of lies and deceit? How can someone be so brazen when he is so clearly not doing his duty?

Well, as I booed and threw fake €5,000 notes at his car, the smirk on Joseph Muscat’s face explained everything that had gone wrong with him and this country: people had created a monster, and it was now threatening to consume us all.

That smug smile was, of course, an act: he and those around him know that once a crack shows, once one of them appears to be scared or slightly subdued by the power of the people, all will go down in flames. That is why people like Evarist Bartolo and Julia Farrugia Portelli keep releasing statements saying that things are bad but still vote for Muscat when push comes to shove. But that is indeed the problem. How can those who have pledged to protect us and our interests, as well as to uphold the laws of this land, be so shameless when they have so clearly failed?

The answer is twofold: the people and the system.

The people here in Malta have long turned politicians into demigods, but Joseph Muscat has been at the receiving end of such adulation for almost a decade. With two landslide victories under his belt and his self-satisfied attitude, Joseph has cemented his iconic status among those who hail greed and lust for power as positive assets. He also knows how the majority of the people in this country think. I mean, just watch this video… People blatantly ignoring the fact that a journalist’s assassination was orchestrated by close allies of the Prime Minister and instead talk about receiving their cheques.

Then there is the system, which places so much power in the fickle hands of whomever may be named Prime Minister, that we are all left at their mercy. How can someone not feel smug when the Constitution, through its flaws and loopholes bolstered by years of mismanagement by this and previous governments, gives one person so much power? Joseph Muscat may not be the first person to have so much power consolidated into him, but he is definitely the one who has abused of it the most: he has used it to safeguard the interests of his friends – and possibly his own – as they sold off our hospitals, entered us into unfavourable energy deals, and now, potentially, assassinated a journalist.

Indeed, what is happening in this country is the erosion of all the things that could have once kept a politician on their toes. The system is all at the disposal of one man who is not even held accountable by the people. And this brings us to a situation in which Joseph Muscat, whose position as Prime Minister is completely untenable and may even be illegitimate, hands out or denies Presidential pardons to people who have named, or could name, his closest advisors as potential conspirators in the murder of Daphne Caruana Galizia and a slew of other crimes.

This may be completely unacceptable in a democracy but, worryingly, it is completely accepted by many people in ours. The fact that people mention ’40,000+’ when Joseph Muscat is under attack is what has given this man and his associates the carte blanche to bulldoze over us and our laws. 40,000+ votes should mean 40,000+ more watchdogs, not 40,000+ excuses to bulldoze through the system.

And make no mistake, politicians like Joseph Muscat are the most dangerous type because they don’t just ignore their constituents and the law, but they are hailed as heroes for doing so by the people. And that is our fault for letting Joseph and his Cabinet get away with everything from environmental degradation to money laundering over the past few years, as well as the fault of previous governments for not arraigning the likes of Lorry Sant and other thugs from both sides when they deserved to. But that is a story for another time.

What we have to do now is rise up and ensure that Joseph Muscat and all those in Cabinet who support him go. We need to see to it that those we pay to govern and who are siding with the status quo as it works against the people are forced out, arraigned where necessary and, if found guilty, thrown into prison.

Then we need to start the healing by, firstly, pledging never to support a party blindly and, secondly, by ensuring that civil society continues to do its job no matter who is in government.

Ultimately, this could be a rebirth for our democracy or it could be the death of it. What happens next depends on us.