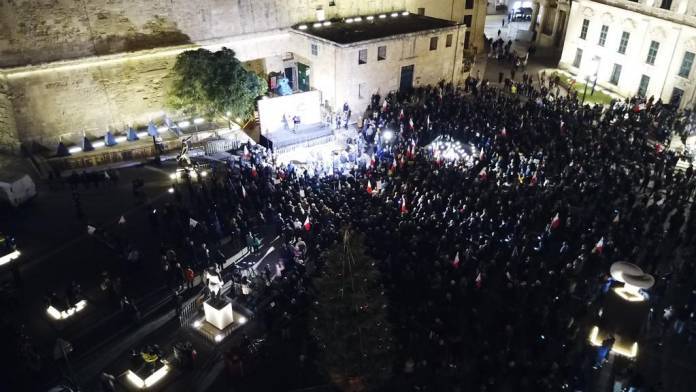 At the end of another week of political convolutions, it’s hard to imagine a time in the near future when things will go back to normality. For me, and many others, justice will not be fully served until Joseph Muscat is ousted from Castile and his successor has replaced the Commissioner of Police and the Attorney General to allow a proper investigation that truly leaves no stone unturned.

But even if and when all that happens, Malta will still have a lot of soul-searching and healing to do. A situation in which the alleged assassins of a journalist have been linked to the highest office in the land is bad enough; a situation in which the Prime Minister doesn’t resign or isn’t forced to do so by his Cabinet and the people was, until recently, unthinkable. But it has happened.

As shocking as it is, this has been a long time coming. These are the fruits we are reaping for 55 years of Independence done wrong, starting from the values we have instilled in the people of Malta: those of undying loyalty to one party or another, unchecked greed and self-belief based on untruths.

There are many reasons this has happened but one of the most obvious is partisan media, which propagates messages based on the whims of one party rather than the truth, the whole truth and nothing but the truth. This could easily be seen before this happened, but now it’s more blatant than ever, to the point in which some newsrooms are almost completely ignoring the current situation. If the time for healing ever comes, party media should be closed with immediate effect. Indeed, not only is this sector of the media doing a disservice to society, but it is actually helping in its dumbing down, manipulating the people into believing half-truths and blatant lies. Until now, this may have not been overtly dangerous, but this time round it could lead to disaster. That’s why the full functioning of our democracy demands it.

Education is another problematic area in this nation. The fact that most schools churn out people with qualifications rather than people with the ability to debate, think critically and analyze situations is how we have ended up in a country in which people who are supposedly meant to be intelligent say the stupidest things and support a provenly-corrupt government openly with no shame. People need to be taught their rights and be equipped with the tools needed to unleash their power as citizens. Without that, we will always have a nation of sheep that continue to search for leaders even among those who are completely wrong for the job.

When all this is over and if the time for healing ever comes, the reform of our Constitution needs to take centrestage. The powers of the Prime Minister must be limited. A Prime Minister should not have any say in the operations of the Malta Police Force or the office of the Attorney General, not to mention the Planning Authority, the appointment of the judiciary and so on. All these must become completely autonomous, with people getting positions there based on meritocracy, not political whim.

Meanwhile, the powers of the President must be increased, particularly in extraordinary situations such as these. After all, there is little point in the Office if all it is, is ceremonial even when all the sh*t is hitting the fan. We must also set up watchdogs with proper authority that check the government at every turn. These must also be autonomous.

I am under no illusion that the above is easy or enough. The truth is that no opinion piece is enough to show what has allowed us to get down to what I hope is rock bottom. What scares me the most, however, isn’t what is being revealed under oath in Court, but the way some people have reacted to all that is happening. If you want to see how big our problem is, just head to a comments section on Facebook and spot ‘the protestors are stopping me from taking my children Christmas shopping in Valletta’ or ‘viva Jowseff’ comments. All this, when the assassination of a journalist has been linked to those in Castile. You know, that’s kinda more important than your Christmas crackers, sinjura…

Staff Reporter   June 30, 2020
St John Rescue Corps is set to continue its range of services introduced to counter the effects of the COVID-19 pandemic in Malta, as the country adapts to the ‘new normal’.

Amy Borg   June 29, 2020
Police Inspector Godwin Scerri said the accident happened on Sunday 28th June at around 9:30am in Isoard Street St Paul’s Bay. He also said that Adaw Mahmud went into Awad’s shop, started arguing and the accused ended beating the man up using a pointed and sharp instrument.