With the situation in terms of new daily cases and the number of active cases remaining stable, thankfully even improving a little in the last few days (as can be seen from the two graphs), instead of discussing these figures I shall try to explain as simply as possible what it means when we hear values for the efficacy of a vaccine. 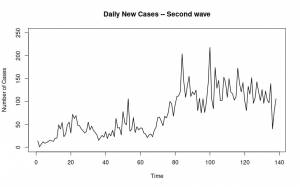 The efficacy of a vaccine is estimated in Phase 3 of the vaccine trial. This phase tests the vaccine “in the field” rather than in the controlled environment of a clinic. What is done is to take a sample of volunteers who come forward to have the vaccine tested upon them. In the case of the Covid-19 vaccine, massive samples of volunteers are being studied and in some trials, clinics from different parts of the world are collaborating by combining their efforts. So, suppose a sample of 30,000 volunteers is recruited. Efforts are made to have these volunteers as representative of a wide variety of the population as possible. The volunteers are randomly divided into two groups. One group will receive the vaccine and another will receive a placebo, that is, an injection of some neutral innocuous fluid. 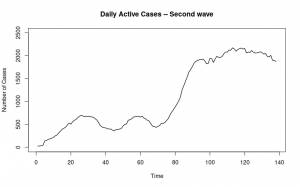 Great care is taken to ensure that a double-blind procedure is followed, that is, neither the volunteer nor the medics administering the injections or their institutions know whether one is being given a vaccine or a placebo.  Only the lead researchers have this on record. Let us suppose, for the sake of illustration, that the sample is divided into 13,000 who get the placebo and 17,000 who get the vaccine being tested. The volunteers then carry on with their normal life (except for very frequent monitoring by the doctors who administered the dose, monitoring which can continue for months or years, even after the vaccine is approved).   Suppose that, after a time agreed upon beforehand, the researchers record the number of volunteers who came down with the illness. Suppose that 110 caught the virus, and 95 of them had been given the placebo while 15 had been given the vaccine. Therefore the proportions of sick volunteers from the two groups are 95/13,000  = 0.73% in the placebo group, and 15/17,000 = 0.09%. Both are small proportions, but what the researchers are interested in is the relative risk (RR) of getting the virus, which is the ratio of the two proportions. In this example, this is 0.09 divided by 0.73 which is equal to 0.12 = 12%. The efficacy of the vaccine is then calculated to be 1 – RR which in this case would be equal to 1 – 0.12 = 0.88 = 88%.

Percentage values in the 80s or 90s for a vaccine are considered to be very good indeed. The smallpox vaccine, which led to the eradication of the smallpox virus, had never been tested in the field in this way and, as far as I know, only clinical estimates are available. The polio vaccine, which is another success story for vaccination, has been reported to have 60%-70% efficacy against all types of polio and 80%-90% against the most serious forms of the disease.

But epidemiologists agree that it is not only a good vaccine which is necessary for the successful eradication of a disease. A good vaccine program is essential. This involves several questions, including a few like: How efficient will the distribution and the delivery of the vaccine be? Will it reach rich and poor countries? And what will be people’s attitude towards it? Is there a danger that people who get the vaccine will expect that they can immediately do away with wearing masks and practising social distancing, a behaviour which can make the situation worse in spite of the vaccine?

Prof Josef Lauri is a mathematician at the University of Malta