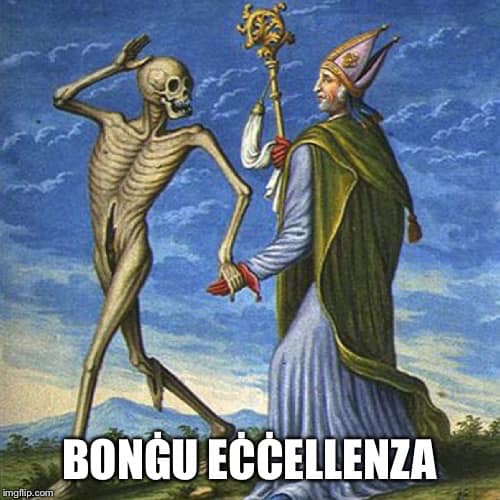 Responsibility. It’s not a concept many of us like to be reminded of, but it’s one we must all live with, or one would hope so since everyone in this godforsaken land keeps shirking it.

One of the biggest stories this week told of how Fr Deo Debono, the parish priest of St Augustine’s in Valletta, is facing criminal charges related to the theft and selling of art belonging to the said parish’s collection. If found guilty, a man whose sole job was to look after the parish would have been the one undermining it, having sold his soul and reputation for cold, hard cash while we stand to lose things which are irreplaceable. Meanwhile, his sister, a headmistress who is meant to instil solid values in young people, uses her Facebook space to say that the Archbishop should have informed her brother before he was let go, rather than reacting responsibly and publicly to the very publicised accusations Debono is being faced with.

Now, why does that remind me of pretty much most people in this country? Well, because Debono’s story could be a clear example of how we have completely lost the plot and of how short-term gain is bankrupting us of morals, values and common sense. It could be a clear example of why we have ended up living in a country in which the Government announces it will throw construction waste at sea without adding ‘April Fools!’ at the end of the press conference. It’s why people feel no shame over ruining pristine valleys or denying other creatures their natural habitats just as long as they can live ‘nicely’ in their soulless gypsumed homes.

It’s just everyone, everywhere: from industry, where people keep cutting costs at the expense of quality and their workers’ sanity, to education, where we leave the next generation to learn in makeshift classrooms fashioned out of containers. It’s all the same and it is exhausting, especially since the more devious and immoral you are, the more of a hero you will be considered to be and the more people will come out calling those who stand up to you ‘wannabe judge and jury’.

Whatever happened to the responsibilities we have towards each other, towards preserving the past, and towards ensuring a better future? Money’s always talked, sure, but now it’s belting out a Callas every other second.

And that’s what makes Fr Deo Debono’s story, should it be proven to be true, so infuriating: couldn’t he have just kept his hands in his own pockets? Couldn’t he have stopped himself for the sake of his reputation, if not for the fact that he was the custodian of these artefacts? Why should we take his family into consideration while reporting a criminal investigation when he didn’t give two hoots about them and those around him? And couldn’t he see that what he was doing would undermine his role, that of his superiors, and deny future generations treasures that are rightfully theirs?

The mind boggles at how everyone is so short-sighted but, you know what, fine. FINE. Y’all win and we can live in a mediocre country run by crooks. I’m done.