The numbers released by the Health Authorities on Monday show a slight increase. Should one panic? I do not think so. In fact, a slight increase for a day or two was to be expected. The time series models predicted something like this, but even a cursory look at the epicurve shows that this phenomenon, whether on the way up or on the way down, moves in spikes separated almost by regular intervals. But the next few days are critical. I would not surprised if tomorrow we would register another slight increase. The important thing is that we reach the next peak within a few days and that it is lower than the previous peak — the quicker and the lower the better, of course. Then we should hope for another downward turn followed perhaps by a few smaller spikes on our way to days with single-digit numbers. 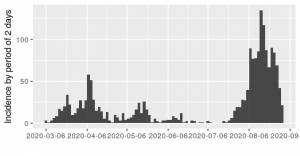 Instead of fitting a time series to our data, let us take a quick look today at one of many theoretical models which try to understand how epidemics form and evolve. One of the most popular models is the SIR model put forward by Kermack and McKendrick in 1927. The population is considered to be partitioned into three groups, those (S)usceptible to infection (which can be the whole population at the beginning), those who are (I)nfected, and those who (R)ecover or are (R)emoved from the population because they pass away. The model assumes that the recovered will have immunity for life. A governing parameter is the so-called R-factor, which can be taken to mean the reproduction factor or replication factor measuring how many others an infected person will infect. Everyone knows today that this R-factor should be less than 1 for the spread not to become an epidemic. I do not think that this parameter is the end-all and be-all of the story in real life, for a number of reasons which we can discuss another time, but we’ll use it because it helps the description of the processes involved.

So, in this model, members of the population move from S to I and eventually to R where they remain, and it is the possible rates at which these movements happen that give different scenarios. The first figure below shows this happening for an R-factor of 2 (the “R” in R-factor does not have anything to do with the “R” in SIR). I have taken the length of the period during which the person is infectious to be six days, ruling out the period when the person is isolated or in-hospital care. The epidemic does die out but mainly because the pathogen does not have many more persons to infect. Herd immunity has been achieved. But the cost is that around 8,000 out of a population of 10,000 have “recovered”. For something like the common cold this would not be a grave issue, but in serious illness in which, for a large fraction of those in this group R means removed or passed away, or for those who recover but have to live with serious consequences the rest of their lives, this would a hefty cost. 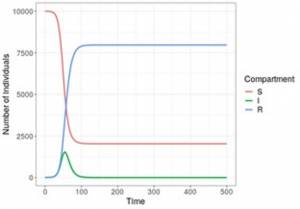 If the R-factor is reduced to 1.5 we already see a marked difference, as the next figure shows. Here, we still get an epidemic, but it dies out when less than 6,000 people have been infected. 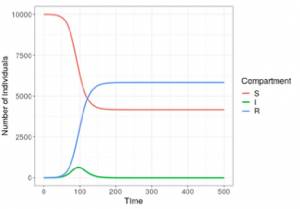 But what happens if those who get the illness do not acquire life-long immunity? This is called the SIRS model (Susceptible, Infected, Recovered, and Susceptible again). Suppose their immunity last for 80 days. Keeping the R-factor at 2 and the infectious period at six days we get the following graph. The epidemic persists and settles down to what is called an endemic state. This is what happens with seasonal influenza or the common cold. We learn how to live with it, and the virus learns how to “live” with us. 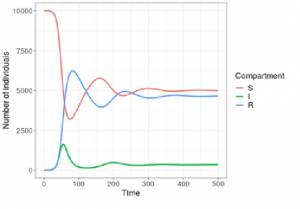 Graphs were produced by the shinyR package in the CRAN repository, by Sinead E. Morris. These programs provide a very interactive resource for investigating various epidemic models.