Today, Friday 11th September, I will be writing a more substantial piece. Recently I have given Newsbook.co.mt daily comments ion the way the COVID-19 numbers are speaking. We skipped a day, yesterday, in our reporting because two-day intervals help to remove fluctuations in the epicurve.

As the curve shows, we seem to have hit a plateau, hopefully, a brief maximum, as even forecasts of next daily numbers from models of the time series are stuck on 42 or 43. What could be happening? We were hoping that the descending numbers of some days ago were indicating that we would be getting away with one large wave in this second phase. But if we look at the behaviour of the epicurve in the first phase we see that, apart from local fluctuations, we had then experienced four waves before the numbers of new daily cases tapered to zero. It seems that something similar might be happening here. We seem to be going up a second wave before we see the numbers taking another dip, hopefully in the coming few days. This does not necessarily mean that the numbers are out of control, but it certainly indicates that the descent will be much slower than what we had hoped for last week. 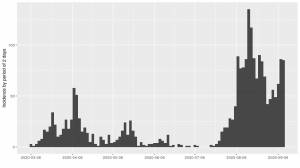 Now any prediction one makes from such data, whether it is from complex mathematical models or a simple-minded comparison of visual patterns as we did here, stands on the assumption that the conditions producing the data will not change. But in a week’s time schools will open, and that could be another game-changer. Today, the Superintendent of Public Health explained very well how many of the known cases belong to clusters of people having contact with each other. Could the opening of schools, even if it is done with strict precautions, join up some of these clusters into a giant cluster through cross-contamination? Probably the biggest conundrum facing school authorities is what to do with children how are found to be in contact with existing clusters. Send these children to quarantine and depriving these unlucky ones of all the benefits of attending school, made worse if no online alternatives are made available, or allow them to attend and risk getting unmanageable numbers of virus carriers?