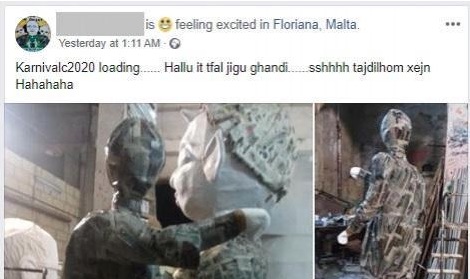 There really is no dull moment in this country, is there?

I’d passed the best part of my week literally panicking that I would have nothing to write about for today, and lo and behold the crassest carnival float imaginable swoons in to steal the spotlight.

Depicting Archbishop Scicluna flanked by two demonic babies and fronted by a rainbow cake topped by two grooms, the carnival float’s cherry on the cake was having ‘Dar San Ġużep [sic]’ painted in big, bold letters in the foreground.

In a modern democracy, satire is a weapon to be used against those in power and no one should be above satire, least of all the head of the Catholic church in Malta.

Look, satire is one of our most precious and powerful tools. In a modern democracy, satire is a weapon to be used against those in power and no one should be above satire, least of all the head of the Catholic church in Malta. But, seriously, there is a time and a place for certain kinds of satire, and there is also a responsibility that comes with it.

So let’s break it down into a few key points:

While no one can deny that the Catholic church has been involved in many scandals surrounding child abuse – and each of those should be investigated and those found guilty thrown in jail – using the image of a man who has been asked by the Pope to investigate such matters and who many, both inside and outside of the Church, agree is doing a stellar job, is, quite frankly, lame.

While Dar San Ġużepp was indeed embroiled in such a scandal in the past, to our knowledge this has been stemmed out. What is certain is that there is a whole new generation of children who call this place home.

These children have already suffered enough in life without having their home crassly linked to child abuse at a time where no evidence of such occurrences exists. On top of the psychological repercussions of that, the social connotations that can come from this could be further detrimental to their wellbeing.

While carnival is all about satire and pushing the bar, there are different carnivals for different audiences. The carnival in Valletta is aimed at children not adults; it is not the free-for-all (oh, how I miss it!) of the Nadur carnival 10 years ago, nor is it a theatre stage, an art gallery, or on an online forum. It is an event catering to a specific audience. That seems to have been completely missed.

While we, the gays, are indeed everywhere – we are in your homes as your children, siblings or parents, your workplace as your coworkers or bosses, your bars as owners or fellow revellers, etc. – I have no idea how we ended up being depicted on this float. My guess is that its creators wanted us to think that while Archbishop Scicluna takes aim at gay marriage he is ignoring the sex abuse scandals.

It’s entirely random and unnecessary, particularly as I have no idea what some people expect the Catholic church to say about gay marriage. The Church has its own rules and values: the fact that so many people expect it to twist and bend them so that their views and beliefs fall within line of that is beyond me. But that’s another story.

While satire is crucial, it’s important to know what satire is before you can dabble in it. This float wasn’t satirical because:

a) there was nothing humourous about it,

b) the only ridicule came at the expense of the victims,

c) the main focus is neither topical nor contemporary, and

d) the only exaggeration is the Archbishop’s involvement in child abuse when it is a well-known fact that he has been instrumental in satisfactorily tackling the child abuse crisis in numerous countries on behalf of the Pope himself.

Sylvana Debono   March 26, 2020
Data published by the National Office of Statistics show that three out of every five adults above the age of 15 years are in employment.

Glove in the time of Corona – doctor explains why gloves are not the...

Coryse Borg   March 26, 2020
In a post on Facebook, self-employed general practitioner, Dr Mark Camilleri has clarified some misconceptions about wearing gloves as a measure against coronavirus.

Teatru Malta to invest in artists now so that they can work with them...