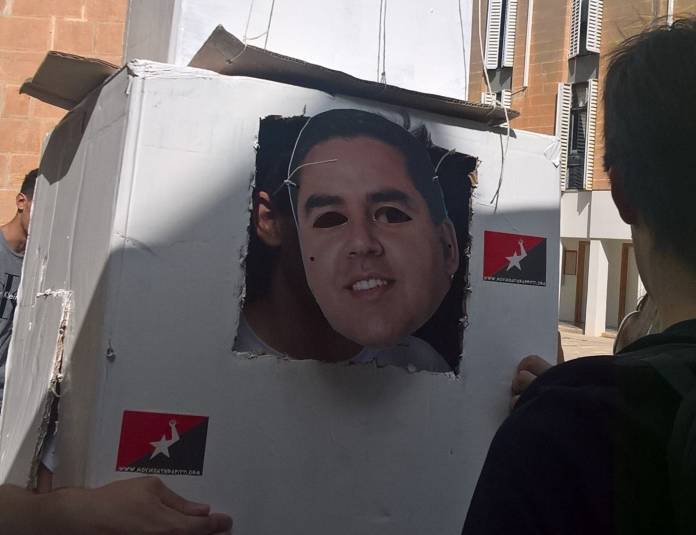 I was studying in the UK when tuition shot from £3,290 up to £9,250. One day there was a protest outside our university. I didn’t go and, instead, I went to my lecture. When the tutor walked through the doors, he slammed his briefcase on the desk and told me and the three other students who bothered showing up, “I am really disappointed in you. Just because this issue doesn’t concern you directly, it doesn’t mean you shouldn’t be out there protesting. Protest is healthy and needed. I will give you the lesson you paid for, but know that I am not happy with you lot.”

I was shocked, but he was entirely right. Protest and debate are key concepts every person, whether at university or not, should embrace and fight for. After all, we mustn’t forget that, just a couple of generations ago, our forebears (on our shores and beyond) died for the right to be heard.

So, when I read a news item like the one we saw this week, detailing how students were stopped from wearing a mask depicting Infrastructure Minister Ian Borg and building a tower made out of cardboard, I get worried. A university’s main role in society is not to churn out degrees and workers, but to expand the next generation’s understanding of the world through the imparting of knowledge, morals, values and healthy debate. Part of that has to include protest: an intelligent person doesn’t just accept and regurgitate what they are told but asks questions and voices their opinion when they disagree.

Universities have a duty to be at the forefront of safeguarding democracy; their very inception was down to the democratisation of knowledge, from being the realm of the clergy alone to that of the layman. As things stand, in Malta, this isn’t the case, as was shown when just fifty students and fifteen lecturers turned up to a vigil commemorating the then just-assassinated Daphne Caruana Galizia.

A journalist had been assassinated (not femicide, thank you very much) and a section of society who should strive for the highest ideals and has the most time on its hands couldn’t be bothered to turn up. And while no one should be forced to attend any vigil or protest they don’t believe in, it is indeed EXTREMELY worrying that so many didn’t care.

More seriously, though, those who like this week stopped others from protesting aren’t just doing a disservice to the aggrieved, but to all of society.

We all stand to lose when our highest learning institution doesn’t fulfil ALL its functions PROPERLY, and teaching is just the tip of the iceberg. But, even if the University of Malta wants another reason to get its students to embrace protest, then I’ll give it one: Cambridge University.

In 1209, the body of a woman was found in the town of Oxford. She had last been seen with a student from the university, who the authorities couldn’t find. Enraged, they rounded up the student’s three roommates and hanged them all for his supposed crime. The repercussions? The whole student and tutor body in Oxford protested by upping and going to Cambridge, starting one of the world’s best and best-known universities, as well as one of the longest rivalries known to humanity. In brief, protests make for great universities and even better societies. Cherish them and fight for them.

Staff Reporter   July 3, 2020
Five social initiatives have been selected as the first group of semi-finalists for this year’s Malta Social Impact Awards (MSIA) and are now in the running to win financial and non-financial support.