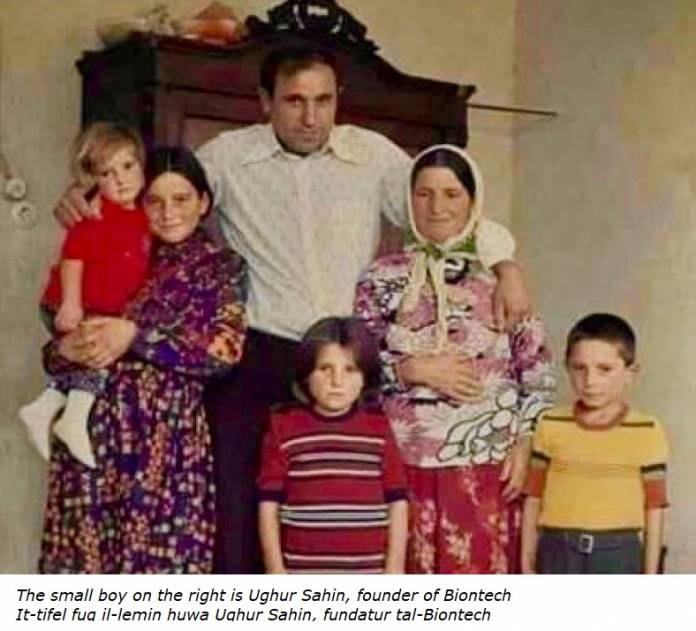 An anti-COVID19 vaccine, which will be amongst the first to be rolled out, was developed in Germany by a husband-and-wife team Ugur Sahin and Ozlem Tureci.

Dr Sahin, 55, was born in Turkey. When he was 4, his family moved to Germany, where his parents worked at a car manufacturing plant. He grew up wanting to be a doctor and became a physician. His wife is a daughter of Turkish immigrants who wanted to become a nun but ended up studying medicine. The pair was initially focused on research and teaching.  After several years they founded a biotech company that became a pioneer in developing a vaccine which will hopefully combat the pandemic that brought the world to its knees.

This story is not unique. We recently read that in the US a son of Maltese migrants, Derrick Rossi’s research company is close to developing an anti-COVID vaccine.

Pope Francis in his recent encyclical Fratelli Tutti reflects that “Immigrants if they are helped to immigrate, are a blessing, a source of enrichment and new gift that encourages a society to grow”.

Regrettably, the political rhetoric, especially that of recent years, is fomenting and escalating a greater sense of an ‘us’ and ‘them’ mentality. We are chiding an opportunity to build communities that are stronger economically and more inclusive socially and culturally. We cannot ignore the plight of millions of people, even in neighbouring countries.

It is often said that we have to nip the problem in the bud and try to deal with the causes of the movement of such a large number of people.

War-torn regions are one of the main causes of the displacement of many people.  Arms exporting nations have a double standard. One hand they speak of securing universal peace, on the other hand, they clamour to sell arms to dictators, paramilitaries and human rights abusers.

A report published by the Washington-based Centre for International Policy shows that the biggest arms exporters to Africa and Middle-East are the United States, Russia, France, Germany, UK and China. Advocates of arms transfers often describe them as a force for stability. However, this has clearly not been the case. Arms flows have exacerbated conflicts, facilitated human rights abuses, led to countless civilian injuries and deaths, and enabled widespread devastation.

Western countries have exploited and keep exploiting poorer countries.  Coffee and cocoa are tied to a long history of colonialism and slavery. The production of these crops remains a hotbed of exploitation, child labour and environmental degradation. Coffee farmers typically earn only 7-10% of the retail price of coffee.  In Brazil, the ratio goes down to 2% of the retail price.

It is quite easy to dismiss responsibility and shift blame. However, if we choose brands that align with our values, we vote with our wallets. In turn, we will be supporting businesses we want in the world and pave the way toward more sustainable and just economies.

Archbishop Scicluna has often commented on the way that the village of Balzan has successfully integrated migrants as a success story.  On the other hand, excluding these people and other marginalised groups will end up in pushing these people at the margins of our society, a fertile ground for increased division and criminality. We complain of ghettos that are slowly forming in our country. Perhaps we could ponder on what is causing these people to form such clusters and live in substandard conditions.

We will soon be celebrating Christmas. Jesus was a refugee. His parents had travelled a great distance in obedience to a political mandate they may have not fully understood. Exhausted from the journey, Mary and Joseph sought lodging but were turned away, so they took shelter in a stable.

We have prettified and romanticised the nativity scene over the centuries. How is it possible to miss the parallels between the young family in the stable and the new wave of refugees searching for a safe place to live, to rear their children?