Grech was sworn in as MP after the party’s executive committee unanimous approved that he should replace PN MP Ivan J. Bartolo who resigned his seat in parliament paving way for the new PN leader to succeed Delia as Opposition leader.

Bartolo was only elected to parliament seven months ago after taking Marthese Portelli’s seat on the Ninth District.

He arrived at the President’s Palace at around 1.15pm surrounded by his family and PN’s deputy leaders.

A leadership race came to an end on Saturday where Grech won against Delia with 69.3% of the valid votes against Delia’s 30.7%. He became PN’s ninth leader. 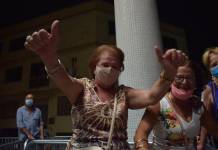 In his first comments to the media after being sworn in as Opposition leader, Grech said that it was important that each person making use of social media should do so wisely and with respect. He added that he will follow President George Vella’s advice and will take action against those who fail to do so.

The newly appointed Opposition leader expressed concern over those members who have either left the party or returned their membership. Grech said that he will reach out to these people. Since Sunday, the party has over 100 new paid up members.

Grech will now hold meetings with PN MPs and plan the way forward.

He remarked that it is a beautiful feeling when people choose you to be their representative acknowledging that the post comes with great responsibility.