Though MEP Roberta Metsola, MP Therese Comodini Cachia and Mark Anthony Sammut had all been considered as potential candidates, all three confirmed that they will not be taking part in the election as PN activists opposed to Delia’s leadership sought to unite behind a single candidate.

Grech announced that he had responded to the party’s call for expressions of interest in a lengthy manifesto published on his Facebook page, in which he argued that one could not speak solely of concepts such as justice, the rule of law or fighting corruption when many were on the brink of poverty.

He thus expressed his hope to bring about a PN “that listens to people’s opinions, feels the difficulties they face and aspires to meet their desires:” but emphasised that the same noble concepts he mentioned actually helped to safeguard the interests of the weak.

The PN activist also emphasised that young activists had been the backbone of the PN in past decades, helping bring about the modernisation of Malta and its EU membership.

Though Grech acknowledged that the party was far from perfect, it distinguished itself from other parties because it continued to focus on people’s wellbeing.

Delia formally confirmed his own intention to contest on Thursday evening, and if only two candidates end up coming forward, the vote goes straight to the party’s paid-up members (tesserati). But each prospective candidate will first have to undergo due diligence before being allowed to contest the election. 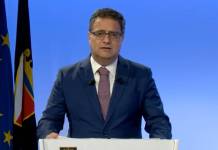