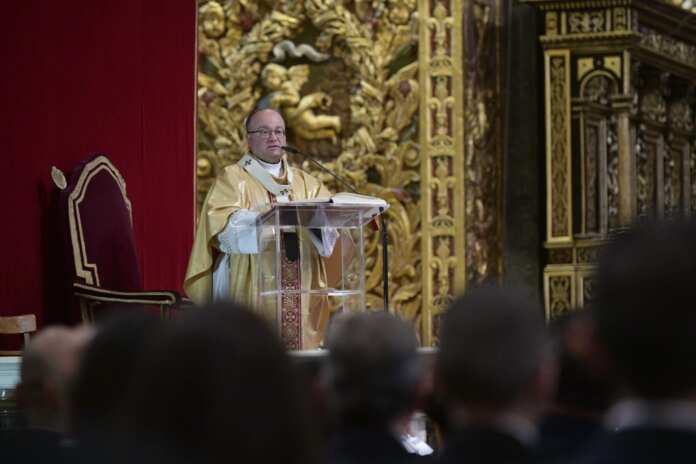 Cultivate a solid social backbone. Shun political bias in your dealings with citizens. This was the advice Archbishop Charles Scicluna offered members of the police corps during mass commemorating the 204th anniversary of the setting up of the police corps.

During his homily Archbishop Scicluna urged Police to always remember that they are not representing any political party, but the Republic of Malta and the principles of democracy, even if they disagree with the incumbent Government. He emphasised the importance of always striving for the common good. The Archbisop said that he know of the difficulties the the police have to face all the time and appealed for the strengthening of the culture of legality  as this guaranteed the common good.

Archbishop Scicluna also said that the arrogance of certain criminals, should not hinder or deter the Police’s work, that of defending citizens’ rights to live in a secure environment and in a civil atmosphere.

He also recalled how the Police’s motto is “Lord lead us”. He said that no matter how much power and authority any man has, one must also recognise that God’s power is a fair and just one.

Archbishop Scicluna it was very important that the Police obey the lawful order of their superiors. However, he stressed that if this order is contrary to the rights and dignity of the human person, then the duty of the officer is to disobey the order of his superiors.

The archbishop spoke about the courage of police office Simon Schembri who was seriously injured while on duty. He promised to visit him at home as he had already did while Schembri was in hospital.