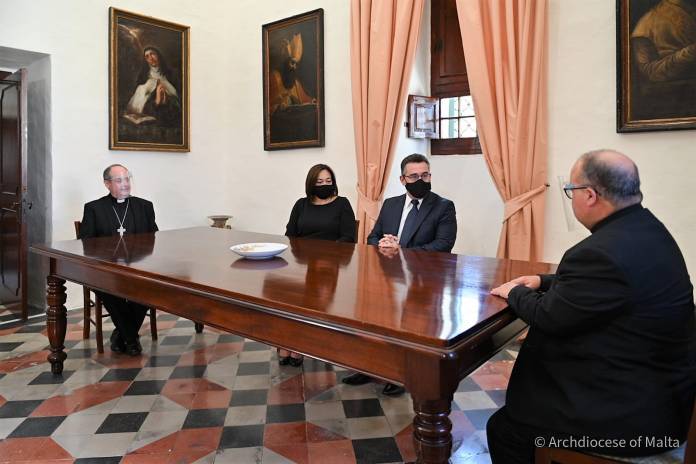 Archbishop Charles Scicluna urged all politicians to follow the advice of Pope Francis and define their political vocation as an expression of love as he was paid a courtesy visit by the newly-appointed Leader of the Opposition Bernard Grech.

In his opening remarks, Archbishop Scicluna highlighted that Grech now occupied an important role in Malta’s democracy, and urged him to serve as an instrument of loyalty, and a voice in favour of the common good.

In response, Grech said that he understood the great responsibilities he faced, and pledged to work to the benefit of as many people as possible – whilst emphasising that he would not ignore the needs of minorities, whose voices are often unheard.

What is public should be enjoyed by everyone – Grech

The visit took place a day after the government signed over the management of the Miżieb and Aħrax woodlands to the FKNK hunters’ federation, with public access restricted during hunting season.

While Grech did not refer to the matter directly during the opening minutes of the visit which were open to the press, he nevertheless made a clear indirect reference to it in which he signalled his disagreement with the restrictions.

He seized upon the Archbishop’s mention of the common good to state that Malta needed to take care of its common heritage, to ensure that it may be enjoyed by all without any exclusivity.

“This is how we should ensure that what belongs to the people is truly enjoyed by everyone,” Grech maintained.

Subsequently, Archbishop Scicluna spoke of the Church in Malta and of the country’s Christian community, which he described as a “garden with lots of trees and plants – maybe even a thorn or two” to highlight the diversity of opinion that existed within.

He elaborated on this community’s role in a country that was developing into an increasingly diverse society, with various cultures mingling with our own and enriching the social fabric. The community, he added, should show reciprocal respect and tolerance, in line with what the Gospel taught.

The Archbishop also touched upon Pope Francis’ recently-published encyclical, Fratelli Tutti (we are all brothers), emphasising that this was a message that Malta – and the rest of the world – should follow.

Christians, he said, should set an example of true brotherhood, pointing out that if the world was a global village before the Covid-19 pandemic, it had become so even more as a result of it.

“While we need to wear lots of masks, we must forget the mask that covers our face and understand that we are all human,” Archbishop Scicluna maintained. “That there is something that unites us, that we are the image of a creator that is love, and that we all have a great thirst for love.”

Grech highlights importance of fostering good relations with the Church

In comments to the press after the meeting, Grech observed that he held Malta’s bishops in great esteem, and had similar sentiments towards a Church in light of the work it carried out in the community.

While he emphasised that he was the head of a secular party, where every individual had their own opinions and beliefs, he nevertheless felt it important to foster good relations with the Church, as he did with other important elements of the community.

“Our ties with the Church will be the relationship between two entities who each have a duty towards the country, according to its needs,” he said.