Newsbook.com.mt  contacted HSBC for a reaction. A spokesperson for the bank said that the bank is operating in an environment that in the last 10 years changed this reflected in an increase in service fees.

Earlier today the Consumers Association said that banks should shoulder social responsibility and not impose more charges on the consumers. The association was reacting to the new regulations introduced by HSBC.

HSBC confirmed that a new €5 charge will be implemented from the 1 April. The spokesperson said that the fee does not apply to clients that in these three months manage to deposit a minimum of €2,300. In case of individuals over 61 years the amount is €1,250.

These amounts need to be deposited in the current or savings accounts. Failure to abide with this a €5 monthly charge will be imposed. These charges will affect people on the lower-income scale such as pensioners.

The association said that banks are making use of consumers money to generate profit while continue inventing charges for consumers to pay.
The organisation noted that HSBC in 2019 made a profit before taxation of €45.3 million an increase of 24% on the previous year. 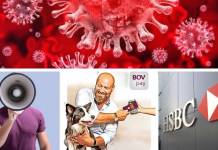