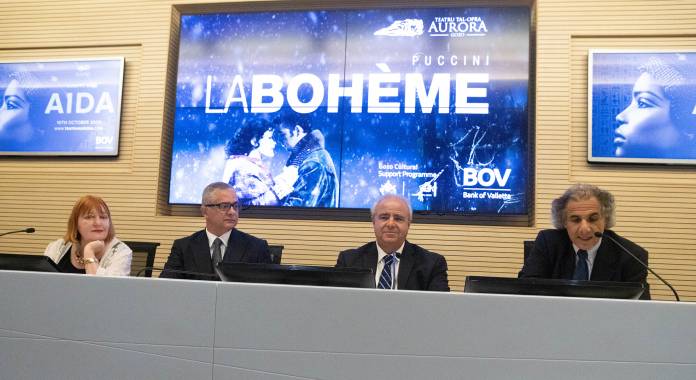 Bank of Valletta will once again be confirming its commitment towards the arts and culture scene in Gozo by extending its support to the Teatru tal-Opra Aurora for its production of La Bohème.

The timeless story of four young artists and two other young ladies who we first meet in their joyful prime years on Christmas Eve will unfold on the islands’ largest opera stage at the Teatru tal-Opra Aurora, on the 12th October 2019, under the musical direction of Colin Attard and stage direction of world-renowned Vivien Hewitt.

This was announced during a press conference which was addressed by Charles Azzopardi, Executive PR and Marketing at Bank of Valletta and Dr Michael Caruana, the President of the Leone Philharmonic Society which owns and runs the Aurora Opera House.

‘This is another distinguished occasion for Bank of Valletta to sustain its support and affirm itself as a leading promoter and patron of local arts and culture’ sair Mr Azzopardi ‘This is particularly true as opera at the Aurora has evolved from merely an assembly of production items brought over from abroad to a production house of its own repute which is constructing new original productions worthy of international attention.’

Dr Caruana sustained this argument when he explained the theatre’s policy to further the collaboration with internationally acclaimed stage director Vivien Hewitt, who this year chose to bring about, once more, the celebrated fashion designer Luke Azzopardi, supported by Camilleri Paris Mode. Apart from the stage direction, Hewitt designed the sets and worked on the whole array of costumes, from which a select number of signature pieces will be designed by Azzopardi in Camilleri Paris Mode luxury fabrics. Handcrafted costumes will be the fruit of laborious work by the Aurora Wardrobe team while the sets are being built by the Stage Crew led by Teddy Mizzi and painted by Gozitan artist Paul Falzon.

Musical conductor Colin Attard also addressed the panel. He explained his contribution in the selection of the international cast as well as the preparation of the Aurora Opera Chorus and the Malta Philharmonic Orchestra. This year’s cast includes the celebrated Nino Machaidze as Mimi, Ivan Defabiani as Rodolfo, Maria Novella Malfatti as Musetta, Krum Galabov as Marcello, Enrico Marabelli as Schaunard and Mariano Buccino as Colline. Dario Giorgele plays Alcindoro and Benoit while young Gozitan tenor Angelo Muscat will be Parpignol.

La Bohème at the Aurora is being produced as part of the Gozo Cultural Support Programme by Arts Council Malta and the Ministry for Gozo. The opera will be further complemented by a number of other events, making up the Opera is Gozo festival, organised by the Ministry for Gozo. A limited number of tickets that remain and further information are available online or from the 24/7 ticket helpline 79045779.

The Aurora Theatre announced that the 2020 season opener will be Giuseppe Verdi’s all-time epic, Aida on the 10th October 2020. Tickets will be issued later on in November 2019.

“Publish document in which Valletta was nominee on FIAU board” – Repubblika tells Finance...

Malta to be filming location for Jurassic World 3?

Coryse Borg   January 23, 2020
According to various reports, parts of the third installment of the mega-popular Jurassic World franchise will be filmed in Malta, mainly in Valletta, later this year.