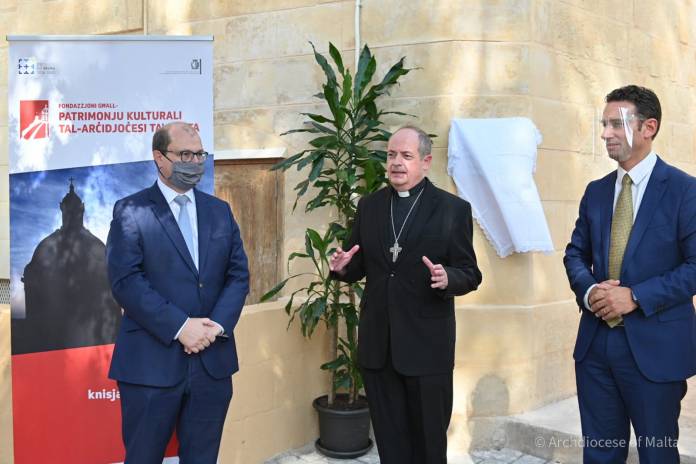 The historic Parish Church of the Annunciation in Balzan has been restored through a €122,000 project co-financed by the European Union – and through the donations of parishioners.

The project was inaugurated by Auxiliary Bishop Joseph Galea-Curmi – who has long carried out his pastoral ministry at the Balzan parish – and Parliamentary Secretary for EU funds Stefan Zrinzo Azzopardi.

Balzan became a parish on 1655, and at the time, the old Church of the Annunciation served as the parish church. But the need for a larger church befitting the locality’s new status as a parish was soon felt and the cornerstone of the new church was laid in December 1669.

Parts of the building were already in use four years later, although works on the church continued until 1695, when it was blessed by Bishop Davide Cocco Palmieri. It was consecrated by Bishop Vincenzo Labini in 1781.

As is the case with many other historic churches, the parish church is a Grade 1 scheduled structure. Such buildings are deemed to have great historical and architectural value, and may thus not be altered in any way.

At the inauguration, Bishop Galea-Curmi said that the project reminded of the importance to safeguard religious, artistic and cultural heritage, stating that the Church in Malta placed great value on this. He said that the parish church was a national treasure, and that it was important to continue safeguarding it so that it may continue to serve as a place where people may feel welcomed and loved, and where they are brought closer to God.

He thanked parishioners for the donations, Zrinzo Azzopardi for his office’s help in securing EU funds, as well as parish priest Karm Farrugia, who he described as key to the project, along with all those involved.

The bishop’s sentiments were echoed by the Archdiocese of Malta’s administrative secretary Michael Pace Ross, who noted that the restoration was the fourth inaugurated by the archdiocese’s Cultural Heritage Foundation. It had previously carried out restoration works in Mosta, Mdina and Bidnija.

Zrinzo Azzopardi highlighted that €4 million in EU funds had been allocated to the conservation, protection and promotion of cultural and ecclesiastical heritage. He also emphasised that such heritage also had a touristic value.

1 of 3
15 parish churches to benefit from EU funds