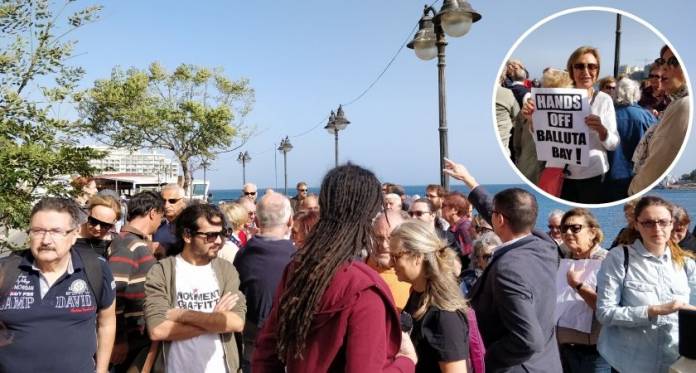 Balluta Bay is under threat, local councils and NGOs warned in a press conference on Saturday morning.

A joint press conference was held in Balluta on Saturday organised by ten NGOs together with St Julian’s and Sliema’s local council. A berthing place for a private ferry is being proposed in Balluta, however, the activists and the local councils insisted that the application should be dismissed.

St Julian’s mayor Albert Buttigieg said that the council is against the development. He warned that if the development permit is granted, not only residents would lose out, but those who enjoy the beach. He highlighted that this is one of the few spots in St Julian’s which can be enjoyed by the public, after much of the shore was taken up by developers. Buttigieg said that the local council is backing up the NGOs.

Sliema mayor Anthony Chircop said that the council was showing its support to the neighboring council, explaining that both councils face similar struggles.

Moviment Graffiti activist Andre Callus emphasized that the bay is under threat. He explained that the area has been completely taken over by the private sector which is seeking to take over the bay. He added, that having a ferry in Balluta Bay would result in extensive commercialisation of the area of the shore.