Despite no cases of coronavirus were recorded in Malta, the government prepared itself over the past weeks for any eventuality.

In a statement on Friday afternoon, the Government explained that a strategic Cabinet committee was formed. The committee which is being chaired by Deputy Prime Minister and Health Minister Chris Fearne, will decide on related matters following the advice of medical and health experts.

The government added that it will be meeting with its social partners next week.

Referring to a statement by the Malta Chamber of Commerce, the government said it was in complete agreement with their public appeal for calm and common sense. 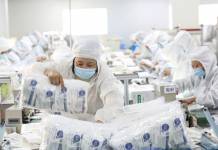