The authorities and contractors / developers have become interchangeable spokespersons for each other while the rights and views of other stakeholders have been largely ignored, the Interdiocesan Environment Commission (KA) said on Saturday.

The KA published an opinion paper on Saturday in which the commission put forward a number of proposals on what should be done so that the death of Miriam Pace would not be in vain. 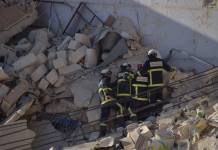 Pace died buried under the rubble of her family home after it collapsed due to construction work going on an adjacent site earlier this month.

“The premature death of Miriam Pace is unfortunately not the only one to have occurred due to irresponsible practices in the construction industry,” the Interdiocesan Environment Commission said.

“We hear of residents who end up homeless, injured or even buried under the rubble, but also workers, including a considerable number of foreigners, who may be compeled to accept any type of work they are offered, and who unfortunately thought of only when one of dies on a construction site.”

The Interdiocesan Environment Commission had already submitted its proposals during the public consultation on the new Regulations on Excavation and Construction practices in 2019. In its statement the Commission said that i that hoped that the proposed regulations would not be just a populist attempt to impress the general public.

“It is outright scandalous that the Building Regulation Office, instead of setting up and maintaining a register of contractors of its own and ensuring that all contractors are qualified, trained and certified to do the work they are contracted to do, chose to abdicate from its responsibility and rely on the developers’ lobby to keep such register,” the commission said. It added that this was “proof” of preferential treatment.

The Commission stated that each proposed change in any construction, planning and environmental regulations need to be fully justified in the document that is issued for consultation. It noted that it has become common practice that submissions on laws, regulations, policies and development applications that are made by stakeholders that are not allied to the construction lobby are summarily dismissed.

The Interdiocesan Environment Commission maintained that sustainable development rests on three pillars: environmental, social and economic. It noted that by over-emphasizing the economic pillar the other two were abused and demolished.

“If all the three pillars are not considered in decision making, ‘development’ does not create wealth which is enjoyed by everybody including future generations,” the Commission said.

“Over the years, the construction industry with its raison d’etre to be pro-business and not pro-person, in spite of its assurances, has shown in a clear manner that is neither capable of generating a product that is sustainable nor able to regulate itself.”

The Commission made an appeal addressed to honest contractors to speak out and make their influence felt in the changes that are required. Landowners are a major player in the development frenzy, the commission noted, adding that sellers of land should also reflect upon their actions.

The opinion paper maybe downloaded from the link below;