The Malta Humanist Association, in collaboration with the Valletta Cultural Agency, is organising an astrophotography exhibition as part of the Science in the City festival.

The exhibition, titled ‘We Are Starstuff’, will be held at the Malta Chamber of Commerce in Valletta between the 27th September and 3rd October. It will showcase a number of night-sky photographs captured from the Maltese Islands by astrophysicist Dr Joseph Caruana.

A launch event will be held on the 27th September at 7.30 pm, with a short presentation by Dr Caruana discussing our night sky heritage, the objects depicted in the photographs, and the methods employed to obtain such images. An informal discussion and Q&A will follow.

The observation of the night sky has shaped human cultures since the earliest of times. People wondered about the stars, imagined shapes and figures, and fashioned stories and cosmologies around them. Calendars and festivals revolved around the dance of celestial objects – with their mark and influence felt to this day.

Astronomy has revealed a deeper connection between us and the skies above our heads, for we are the product of the cosmic furnaces we call stars. As Carl Sagan put it, we are their children. Modern technology permits us to peer deep into the cosmos, in the process unraveling its mysteries and pondering upon our own origins.

This exhibition marks 50 years since the first human landing on the moon and 100 years since the confirmation of Albert Einstein’s theory of relativity. It invites us to immerse ourselves in the colourful beauty of our universe, as we reflect upon our place in the cosmos. 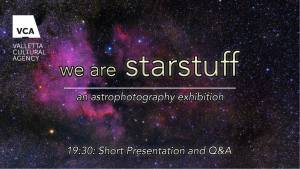 We Are Starstuff will be open between Monday to Friday until the 3rd of October, during the Chamber of Commerce’s opening hours (9.00 am to 6.00 pm). On its opening night, the exhibition will remain open until 10.00 pm.

More information may be obtained from the exhibition’s Facebook page.