The next sitting will be on Friday at 9:30 am and former Attorney General Peter Grech will testify.
Amy Borg
10:32 Assistant Police Commissioner continues to testify behind closed doors.
Amy Borg
10:31 She also said that they need to do their best so that by the end of next month all the information is evaluated so that Europol could present the information in the proceeding against Yorgen Fenech.
Amy Borg
10:30 There is loads of information being analyzed by Europol, said Mamo.
Amy Borg
10:30 Mamo said she can reply to that question behind closed doors.
Amy Borg
10:28 Lawyer Comodini Cachia asks the witness if this evidence and the investigations underway could have been carried out in parallel with the Magisterial inquiry before it was concluded.
Amy Borg
10:27 She also said that from Fenech's chats a number of criminal investigations have been opened and are underway.
Amy Borg
10:26 Fenech's chats are being analyzed and discussed with the Police Commissioner says Mamo.
Amy Borg
10:21 She also mentioned that Yorgen Fenech's electronic equipment, they have a copy of his conversations/chats and are being evaluated and analyzed and a criminal investigation will be opened into the individual/s or entities concerned.
Amy Borg
10:21 Both inquiries fall under "Operation Green", says Mamo.
Amy Borg
10:20 Another inquiry is being led by Magistrate Josette Demicoli.
Amy Borg
10:19 In relation to this, on the 21st of September, an arrest and a search warrant were issued to interrogate 4 people; Keith Schembri, Brian Tonna and 2 others from Nexia BT.
Amy Borg
10:16 Mamo mentioned that on the Panama Papers investigations, she found 2 magisterial inquiries; one was concluded in September and the other one under Magistrate Natasha Galea Sciberras, is still underway and investigators are working on it from dusk till dawn.
Amy Borg
10:15 She says she cannot comment on that investigation as she was not involved at the time.
Amy Borg
10:14 The board says that they are asking about this since the Panama Papers were revealed on Daphne Caruana Galizia's blog.
Amy Borg
10:13 Alexandra Mamo also says that Ian Abdilla had told her to follow the media and that it is imp that the CMRU (Police Communications Office) hands over to them, published articles, from newspapers.
Amy Borg
10:11 The witness says that they receive reports from the FIAU, all are classified as intelligence and then they have to convert them into evidence in order to proceed with interrogations.
Amy Borg
10:09 Mamo also says that they are working very hard on the Moneyval and that the Inspector that is mainly working on this is Frank Tabone. She said that they are being provided with statistics, and have regular meetings with the NCC. They also submit reports.
Amy Borg
10:09 Asked if she is aware if Abdilla kept certain files, Mamo says she is not aware.
Amy Borg
10:07 She also says that the inspectors send her an email about the progress made on every investigation underway. The board asks where are these e-mails being saved.

The board also asks if Ian Abdilla gave her a handover.

Mamo replies, yes and that she will testify about this behind closed doors.
Amy Borg
10:06 She says she keeps the Police Chief updated all the time.
Amy Borg
10:05 "Each and every investigation is important but investigations concerning politically exposed persons, PEP's are given a priority," said AC Mamo.
Amy Borg
10:04 Mamo says that she is not sure that before her appointment, the same procedure was always followed.

She says that when she took the role, she found loads of investigations which were still ongoing.
Amy Borg
10:02 She says the department has very good relations with the FIAU and with the Attorney General.
Amy Borg
10:01 They also adopt the "four eye rule" so that a particular issue is not handled only from her point of view.
Amy Borg
10:00 She also mentioned that she has initiated a new procedure; that every Sunday they meet to give the updates on the investigations on major cases and what investigators think, etc.
Amy Borg
10:00 Madame Justice Lofaro asks if this was always the procedure, Mamo replies yes.
Amy Borg
09:58 Following the interrogation, if there is enough evidence, the individuals are brought to justice. Then if the Police would need to further investigate, they would be granted bail.
Amy Borg
09:57 AC Mamo says this is a very long process and that after the evidence is gathered, the next step is to issue an arrest warrant and a search warrant and the people in question are interrogated.
Amy Borg
09:55 She explains that investigations commence following FIAU reports and media reports. "That is the first step, then inspectors are assigned to investigate according to the sensitivity of the case. Together with the Inspectors and Superintendents, reports are analyzed and they work together to see what more is needed to consolidate the evidence," said Mamo.
Amy Borg
09:53 Mamo is responsible for a task force that works closely with the CID and Europol which are working on Daphne's assassination.
Amy Borg
09:52 She is responsible for 94-94 people. She further explains that when it comes to resources, especially human resources, they are never fully satisfied.
Amy Borg
09:50 Mamo explains that the department has two sections; The section responsible for money laundering and terrorist financing and the other section is responsible for economic crimes
Amy Borg
09:49 Mamo took the position as from July this year. From the Police HQ, they moved to a new building in Santa Venera. The whole department is now under one roof.
Amy Borg
09:48 "To be honest I felt shocked but I kept in mind the interest of the Law Courts and I accepted the proposal," said Mamo.
Amy Borg
09:43 She explained that on the 22nd of June Police Chief Angelo Gafa called her to meet the following day as he wants her to be the head of the Financial Crimes department.
Amy Borg
09:42 She confirms that she works within the FCID, the department for Financial Crimes.
Amy Borg
09:40 Assistant Commissioner (AC) Alexandra Mamo takes the witness stand.
Amy Borg
09:40 The inquiry board enters the courtroom.
Amy Borg
09:37 Assistant Police Commissioner Alexandra Mamo is present inside the courtroom.
Amy Borg
09:36 We are live from courtroom 20.
Amy Borg
09:34 Good morning and welcome to this live blog.
Amy Borg
Monday’s sitting
Gasan unaware that Yorgen Fenech pitched similar project in Bangladesh 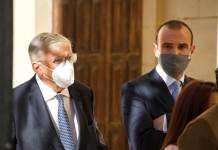 The 17 Black revelations by Theuma in 17 points