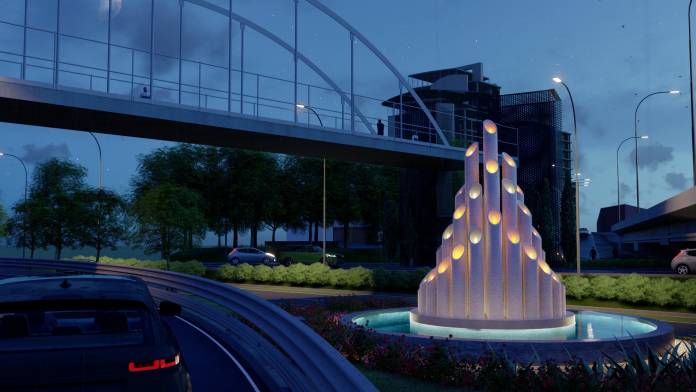 International architecture and design team, Mizzi Studio, has been named one of the winners of the Marsa Junction Project Public Art Competition.

The competition was launched in 2019 as a call for public artworks to embellish Marsa’s large-scale infrastructural development. Mizzi Studio’s entry, Ascension, was named one of four winning submissions in competition’s winners’ announcement.

The design for Ascension – which will be located on the main roundabout leading to the Addolorata Cemetery – centred around the competition’s theme of ‘movement’ and takes cues from its site context. It builds on three key drivers – firstly, its meaningful relation to context; secondly, the stirring impact of ascending motion; and finally, the transcendent power of light.

Rising as a pyramidical cluster, Ascension echoes the verticality of its majestic built surroundings – the nearby Addolorata and Turkish Cemeteries. A series of stone columns rise at different heights to a central point, with the apex of each column cut at varying angles. Collectively, the monument’s flutes form a constellation of sharp, diagonal surfaces that both reflect and emit light during daylight and night-time hours. The monument is intended to sit on a plinth above water, its columns floating upwards as though levitating. Movement extends beyond this upward thrust and is captured in a constant interplay of moving light. As drivers and pedestrians travel swiftly past, their own motion activates the structure’s ceaselessly moving, luminescent beams.

“The location of this monument was central to our design thinking,” Director Jonathan Mizzi said, describing the rationale behind the winning design. “We envisioned a tapering, constantly flickering beacon that would hover above a reflecting water base. Its flutes would look to Addorolata Cemetery, nodding towards and conversing with the historic site. We wanted to celebrate the cemetery’s enchanting steeples and Gothic verticality with a design that channelled contemporary elegance and gravitas. Ascension pays homage to Addorolata’s architectural legacy, as well as its profound role as a place of contemplation, commemoration and rest”.

“Aside from this relationship to context, our objective was to eliminate the stereotype of the ‘static’ monument. Ascension is ceaselessly changing and reflecting – resonating with our own changing lives, fleeting thoughts, and hectic journeys. This endless flux looks to uplift commuters as they drive or walk by, reminding them that life keeps moving no matter what – on both an existential level and a practical one”.

Ascension is formed of 44 columnar structures that rise to a central point via staggering heights. Individual columns will each be luminescent and in constant flux throughout the day and night, fitted with brass tinted mirroring panels at their peak to reflect daylight through their positioning and variations. Commuters will play their part in activating the changing light with their moving shadows and reflections as they drive or walk by. In hours of darkness, the columns will emit flickering LED flames towards the skies, projecting a similar effect to candlelight.

Ascension pays homage to its local material context, using recycled stone as its main material. The lineage of stone and marble within monumental and memorial architecture is longstanding and widespread. In a local context, natural stone prevails throughout the islands’ most beloved architectural precedents. Using recycled stone will also ensure that the artwork is inherently less wasteful in production, in-keeping with the studio’s consistent drive toward sustainability. The monument’s design concept is consistent with Mizzi Studio’s mission to revitalise national heritage and offer new layers of design excellence to a local context. Ascension propels the definition of public monuments into a new realm, extending beyond the role of physical landmark to inhabit the spirit and imagination of its audiences.

“We are so honoured to have been selected to progress with this design,” Mizzi said. “As a studio, we believe in the transformative power of architecture and the potential it has to tangibly improve people’s lives. This junction will be traversed countlessly by millions of people over time – we believe that connecting it to surrounding architectural heritage is vital. Ascension aims to do that. It also acts as an important reminder of the universality of beauty and hope – it aims to lift, to elate, and to bring light to anyone who encounters it.”

Ascension was chosen out of the 16 shortlisted artworks from 56 proposals received in response to an international call for artworks launched by Infrastructure Malta in collaboration with Spazju Kreattiv last March. Thirty-six participants from Malta and six other countries, including Cyprus, Italy, Romania, Spain, USA and Venezuela, entered the competition by submitting one or more designs.

Watch: Tradition and modernity; new bus concept to be unveiled